Ahead of this laid-back, no frills night of fab music for queers (and their friends), we caught up with Knickerbocker DJs Aaronzimbra and Alex Lawless to talk offbeat London, avoiding rooftops, spicy soup and soiling clothes…

Dotori in Finsbury Park serve the best Japanese food we’ve ever found in London. It’s so cheap too – we’re addicted. They’re always full though so book in advance. The £3.50 Korean spicy soup is a meal in itself . Last time we were there Gilbert and George (name drop!) were being weird on the table next to us. They’re always following us around.

Alex is a producer at Radio 1 so is contractually obliged to go to lots of gigs. He’s just recently enjoyed Perfume Genius at the Royal Festival Hall, plus Years And Years at the Shepherd’s Bush Empire.  He’ll also be going to the next Pitched Up at Birthdays – it’s the best place in East London to hear what’s next in grime.

Aaron is a performance curator/producer by day so will be seeing Lydia Lunch Retrovirus with her band at Cafe OTO on June 22nd: Queen of the Underground. Dancers Francois Chaignaud & Cecilia Bengolea as part of the Block Universe Festival should be interesting, and Duckie’s next Gay Shame clubbing and performance extravaganza Border Force looks pretty unmissable. We’re both off on our annual Glastonbury pilgrimage at the end of the month too – so our next club night will be a bit of a warm up for that.

Nothing involving a rooftop. Actually, we live right by the Middlesex Filterbeds, good for a stroll when you’re hungover. It’s a really weird post industrial environment that’s been reclaimed by nature. Failing that, soiling clothes in the Topshop changing rooms is free fun any day of the week. 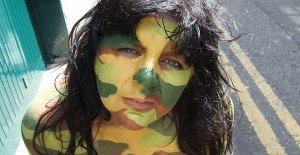 Our club night KNICKERBOCKER is back at The Yard in Hackney Wick on Friday 19th of June.  It’s fun, free and queer and a bit dark and scuzzy too. There are too many male orientated nights in East London with names like COCK, so we wanted to attract a really mixed crowd where we could party with our friends, regardless of gender. We play an upbeat mix of pop, indie and electronica – it’s halfway between a pop night and a heavier dance night. We got fed up of over-produced club nights so we’ve taken things back to basics: exquisite song selection, great sound system and tequila, lots of tequila. Plus the brilliant Katy Baird does the “door” (the venue doesn’t really have a door) and she let’s anyone in. We’ll also be DJing all over the place this summer, at places like Latitude Festival and, randomly, the National Theatre.