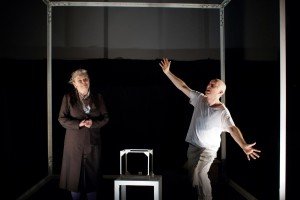 For those of you have wondered in an idle moment: what is the shape of the universe? Is it finite or infinite? Does it have an edge? This is for you!

Marcus du Sautoy and Victoria Gould aim “to use mathematics, humour and theatre to navigate the known and unknown reaches of our world”.

What’s It All About? Through a series of surreal episodes, X and Y, trapped in a universe they don’t understand and confronted for the first time with another human being, tackle some of the biggest philosophical and scientific questions on the books: where did the universe come from, does time have an end, is there something on the other side?

As if that’s not exciting enough, there will be post-show talks with Marcus and Victoria after the evening shows on October 13th & 15th, so you can get your geek on like never before!