To Do List has made a list, checked it twice, and unlike Santa, WE’RE ALL ABOUT THE NAUGHTY!

Here’s our pick of the NSFK (Not Safe For Kids) festive fun to be had this Christmas – cranberry is NOT the only sauce on our shopping list!

A testosterone packed ultra-violent romp, with added sex appeal from the all-male cast exquisitely, captures and transcends the spirit of Anthony Burgess’ original literary masterpiece, 50 years on from its publication.

The momma of all pop-up dining experiences! Tony Hornecker’s ramshackle-divine homemade rabbit-hole of a residence, with its alcoves, balconies, outré deckings and hidden installations, is your backdrop for a yummy, boozy home-made three-course dinner, hosted by alt-drag thunderball A Man to Pet. For this macabre festive outing, the gang have roped in an ass, a fairy, a dead celeb and a dash of the Bard.

World affairs, home news, celebrity deaths, fashion, fads, fame, fortune and Christmas hits are all in line for an explosive yuletide, year-end round-up – guaranteed to get your ding-dong merrily on high.

Join the hero DICK! and his wallflower cat, ‘DAVE’, on their adventures into London town, seeking fame, fortune and friends with benefits. All will be uncensored by the new Lord Mayor of London, as we finally find out if city hall can be run by a DICK!’

Tired of Widow Twanky? Bored of ‘He’s Behind You’? Need an antidote to the usual Christmas Pantomime? Well, this festive season, Blind Tiger invite you to their inaugural ‘Anti Panto’!

Join a whole host of dark and disturbing characters as they regale you with one of the most famous fairy-tales in history – the way it was originally intended! Deep from the bowels of The Leicester Square Theatre, watch in horror as Blind Tiger weave a bloodthirsty, brutal tale of revenge and redemption, filled with plenty of live music and full audience immersion!

That’s all folks! But make sure to check out our Top Christmas Shows article for more Christmas Treats!

You may have missed…

Complete your Christmas with a festive game of B-I-N-G-O at ‘The alt-drag-performance-art-game-show-party that is the stuff of legends.’ 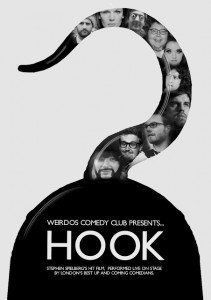 The 1991 Spielberg / Williams film Hook was not appreciated at the time but much-loved by many for both ridiculous and magical reasons. THIS DECEMBER…surrealist comedy club ‘Weirdos Comedy’ (including the awesome Holly Burn & Ben Target) perform the ENTIRE FILM on the BGWMC stage! Part pantomime, part performance art – LOST BOYS or PIRATES!