Win Tickets to Inside Pussy Riot

We’ve a pair of tickets to give away for Inside Pussy Riot at Saatchi Gallery, London for a day entry time during the week.

Win tickets to Inside Pussy Riot. Experience the story of the post-punk feminist badass revolutionaries who stuck two fingers up at the system and suffered the consequences. 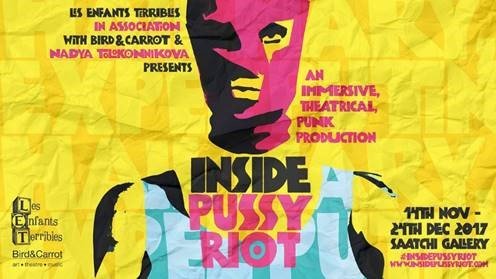 To mark the 100th anniversary of the Russian Revolution, audiences are encouraged to pull on the balaclava and stand up for what they believe in. Stand in the dock as Pussy Riot and live the realities of incarceration through this exhilarating theatre experience. Would you sacrifice everything for the sake of a punk prayer for a freer world?

The immersive world of Inside Pussy Riot seeks to remind audiences what actually happened and how one’s basic human rights and freedom of expression can be taken away at any point.

Inside Pussy Riot shows you what prison, prosecution of political activists and police oppression looks like. It also reminds you what democracy, on the contrary, looks like. And when I say ‘democracy’, I mean real democracy, which is about direct participation of citizens. Inside Pussy Riot plunges you into the totality of an authoritarian system – if you do not choose real democracy and participation, authoritarianism chooses you.

T&Cs: Entries must be received by Monday 9 October 2017 at 5pm. By entering the competition you are subscribing to our mailing list, from which you can unsubscribe at any time. Existing mailing list subscribers may still enter, and subscriptions will not be duplicated. There will be 1 winner, winning a pair of tickets to Inside Pussy Riot  for day entry during the week on a weekday of the winner’s choice (subject to availability). Prize cannot be exchanged for cash. Open to UK residents over the age of 18 only. Tickets are subject to availability. Promoter reserves the right to exchange the prize for one of equal or greater value. If a winner does not claim their prize within 10 days of being notified, then the prize will be forfeited and another winner selected.

← Unmissable Things To Do in London – October 2017
Surrender to the Unpredictable with Heisenberg: The Uncertainty Principle →