The recently launched Peckham Levels, occupying six floors inside the town centre car park, is a six-year project which aims to provide space and a community for “creative and ambitious local people get their ideas off the ground”. At the heart of the project, occupying floors five and six, is an ‘eat, drink, and play’ space – open to the public daily, and home to street food kiosks, bars and cafe, a kids play area, hair salon, yoga studio and – last but not least – Ghost Notes, a music venue with a tasty ‘secret’.

That secret is sister venue Wildflower, a veggie and vegan canteen serving breakfast, lunch, brunch and occasional dinners in the same, multi-use space.

On our lazy Sunday visit, towards the end of service (brunch is served 10am-3pm at weekends), the vibe was chilled-out, laid-back, take-it-easy loafing. An artistically milked latte and a perfectly sweet and sticky slice of Banana Bread later, we were a newspaper and slippers away from writing off the rest of the day!

The Wildflower menu doesn’t skimp on choice – whilst our choices (described below) were perhaps at the more predictable end, other options include a Cheese & Leek toasty and Harissa Scrambled Tofu, as well as an array of fresh pastries and coffee that tastes (and kicks) as good as it looks. 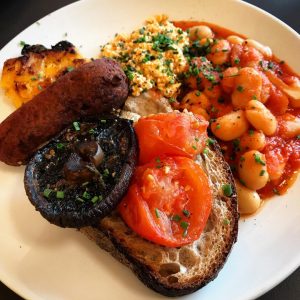 There’s a cocktail menu too, we think, although our waitress didn’t bring us one or point it out on the wall behind the bar – so perhaps Sunday brunch boozing is frowned upon… We hope not, we’re never shy of a few Bloody Mary’s to sort out any hangovers from the night before!

Feeling at the hungrier end of the spectrum, we followed our Banana Bread with two of the heartier options. First, the obligatory Vegan Full English, an artfully rustic-looking pile of seitan sausage, roasted tomato, portobello mushroom, bubble & squeak, baked beans, scrambled tofu and sourdough toast. Tasty stuff, though perhaps missing the final punch of flavour that some chilli in the beans or a smear of roasted garlic on the toast might have provided. The seitan sausage was a meaty beast of a banger, although maybe a little on the mealy side… 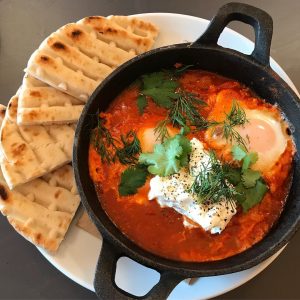 Elsewhere, a mighty bowlful of Baked Eggs, nestled in a tangy tomato and roasted pepper sauce, with a huge spoonful of cool, refreshing yoghurt and a good portion of warm flat bread on the side. This is proper restorative stuff, the gentle spicy warmth of the tomatoes a perfect combination for the creamy, rich egg yolks (a tad – just a tad – overdone here, but hardly worth mentioning), all nicely tempered by the dollop of yoghurt. Sundays were surely made for mopping the final tasty juices from an eggy, tomatoey bowl with a conveniently edible flat bread sponge.

It’s all so, well, Sunday, that there’s a danger it could all come off as a little too smug and safe – but then, who needs a stressful, in-yer-face brunch experience? On weekdays, Wildflower will surely be a gentle oasis of lunchtime calm away from the hustle and bustle of Rye Lane, and while you’d probably be right to imagine that there might be more than a few MacBook’s perched next to the artisanal lattes and flat whites, that’s really not such a bad thing, is it? Relax, get over it, try some banana bread – be happy! 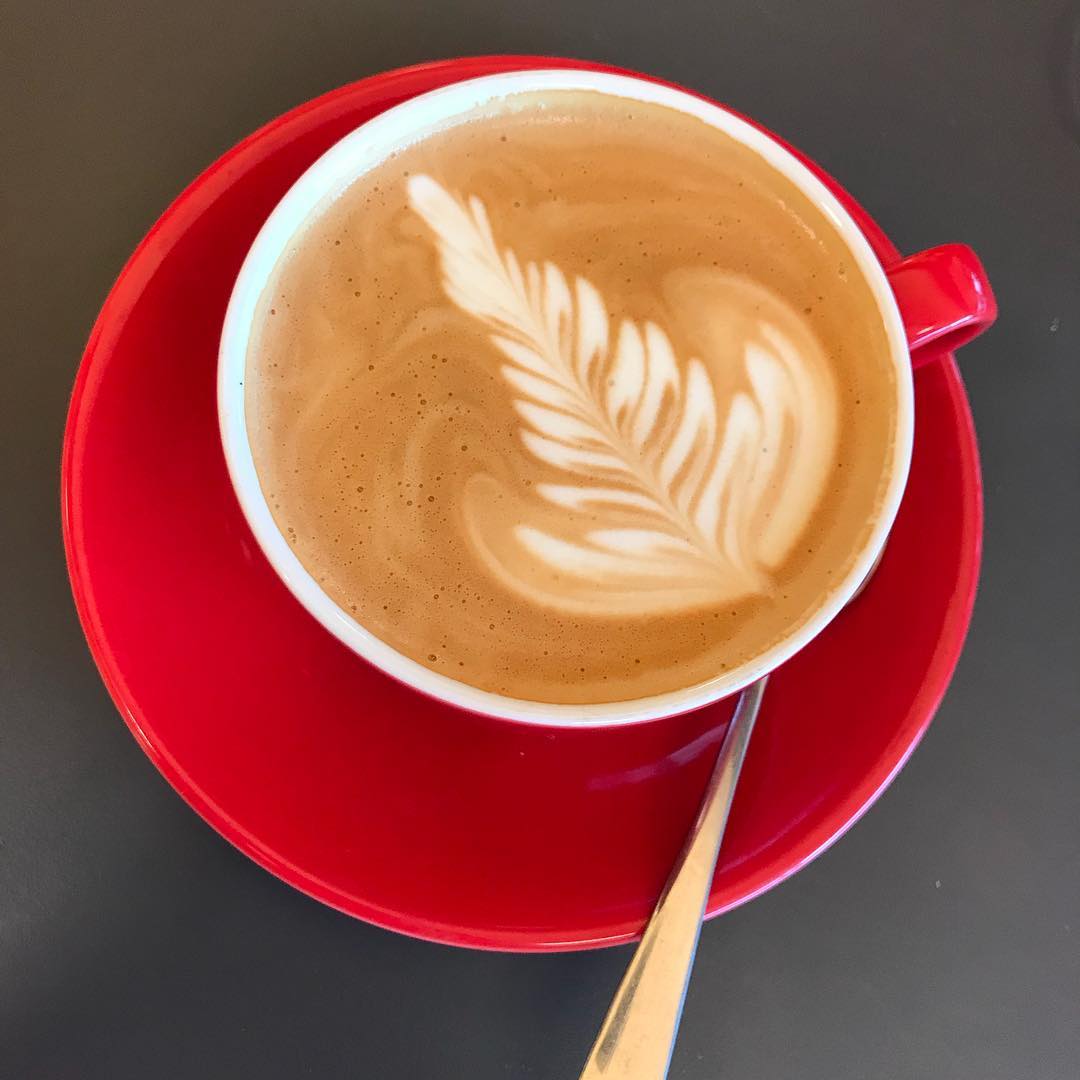