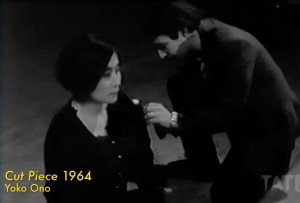 They Say: “Unlock Art offers the culturally curious a stimulating, imaginative and witty introduction to the world of art.”

We Say: Check out the first film in the series below, as Frank Skinner explores Performance Art and its origins; from DADA and Surrealism through to Yoko Ono and Joseph Beuys.

Oh, and if there’s a voice in your head whispering “dumbing down much?”, be assured – the film is not a flimsy throwaway piece of fluff. Without boring the tits of anyone who thought they were just watching five minutes of Skinner on Art, there’s still an exploration of how Performance Art has helped to challenge oppressive regimes, and how it makes us question the way we perceive the world around us. In other words, this is actually interesting stuff!

A total of eight films will be released, on a monthly basis. You can expect to be taken “on an engaging journey through various art movements and themes, from the history of the nude and humour in art, to Surrealism and Pop – offering the need-to-know facts, and making the arts more accessible to a wider audience”.

For more info, and to check out the videos as they are released, head along to http://lemeridienunlockart.starwoodpromos.com/