Tibits Bankside arrived south of the river in 2017, nine years after the first London branch (12-14 Heddon Street), and 17 years after the very first Tibits restaurant in Zurich. 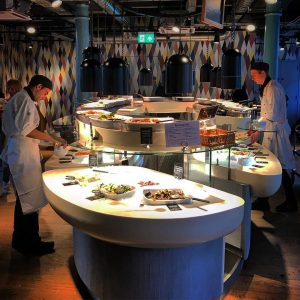 Founding brothers Christian, Daniel and Reto Frei set out to change a culinary scene where vegetarians had little choice, and alighted upon a distinctive modus operandi: “a delicious and fresh vegetarian buffet, as speedy as a fast food joint and as cosy as corner café”.

18 years later, Tibits has nine restaurants in Switzerland and two in London, and while the vegetarian scene in the UK has definitely made massive strides in the last few years, Tibits still feels distinctive.

If your previous experience of buffets is limited to the odd carver lunch, or a Pizza Hut buffet, be prepared for something a little higher-end. The Tibits food boat boasts an array of vegan and vegetarian food, from pies, curries and salads to stews, noodles, crudités and dips. Everything looks (and is) fresh, and attentive chefs are constantly topping things up, taking away dregs and generally ensuring that the food looks as appealing as possible. And appealing it definitely looks.

You pay by the weight at Tibits (£2.50 per 100g for lunch, £2.80 per 100g for dinner), but with bones definitely off the menu there’s no need for an economic plate-loading strategy. A healthy plateful of whatever catches your eye will probably set you back about a tenner, which isn’t bad value at all given the choice and freshness of the food.

On our visit we tried a range of dishes on offer, but of course you could just load up on one or two things – for every melange we saw, there were others with artfully arranged plates of pie, mash and kale. That’s the joy of a buffet isn’t it – you can do as you wish. 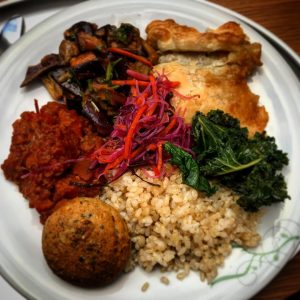 And so to the food. You really can’t knock the freshness, the eye for presentation, or the technical cooking skills. A Mushroom, Potato & Ale Pie was well filled with a light, crisp pastry topping; a Red Lentil & Beetroot Curry had gentle, soothing warmth alongside perfectly al dente brown basmati rice; an Aubergine Salad was impressively grease-free; a Veggie Sausage Stew was hearty, no skimping on the veggie sausage here; a Curry & Coconut Udon attractive and fragrant; and a Vegetable Tatar vibrant and refreshing. Washed down with a bottle of Crusan Colombard-Sauvignon Blanc from the Côtes de Gascogne, this made for a very civilised, nourishing weekend lunch.

With a little room to spare, we shared a plate of puddings – a slightly under-sweetened (c’est possible?) Sticky Toffee Pudding, and a pitch-perfect Chocolate Pudding, topped with lashings of cream.

Alas, whilst everything was perfectly – indeed, reassuringly – inoffensive, there was something missing, that something being anything that packed a flavoursome punch. Sure, the curries were spiced, but oh so delicately – perhaps the idea is that you need a curry that won’t overpower, say, a neighbouring slice of mushroom pie. But the chefs could afford to take a few more risks with their flavours – as things stand, the Tibits food boat teeters dangerously close to blandness without every quite dropping over the edge. It’s a dangerous game, and with many other vegetarian offerings now packing in the flavours and experimenting wildly, Tibits runs the risk of coming over as just that bit too safe.

But hey, safe pays the bills, and on our Saturday visit there wasn’t a spare table for lunch. All the more impressive, then, that the staff remained attentive and friendly, the queue to have your plate weighed never took more than a minute or so, and the presentation of the food boat remained on point. Great armchairs too!

← VAULT Festival 2018 Reviews
Interview with Nigel Barrett and Louise Mari, Creators of Party Skills for the End of the World →