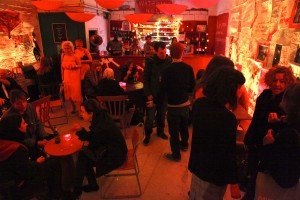 We love the blurb (see below) for this incredibly ambitious The Last Refuge, a new theatre, bar and hireable space in Peckham.

Stimulation. Creativity. Inspiration. Joy. All available at The Last Refuge. An open arts space that gives South London and beyond a sanctuary from the drizzle and the dull. Close your eyes, click your heels and repeat: there’s no place like The Last Refuge.

We’re really looking forward to the first show at The Last Refuge, Confetti by Nicola Baldwin, which shows us a generation of young people facing dwindling opportunities and desperate choices in the 90s, and two young women who come out fighting.

First produced in 1992 to enthusiastic reviews and sell-out performances, Confetti won the 1993 George Devine Award and Time Out Award for “Best New Play”. In 2012 it will be 20 years since the original production. Directed by Helen Sheals who played Linda in 1992; Nicola Sanderson, who played the original Jackie, will take on the role of Margery.

Read the full programme for the first season here