Africa Meets South London at The Groundnut – Book Now to Treat Your Tastebuds!

We caught up with these South London foodies to find out more about The Groundnut, their inspirations, and what they get up to when they’re not cooking up a storm![/vc_column_text][vc_row_inner][vc_column_inner width=”1/2″][vc_column_text] 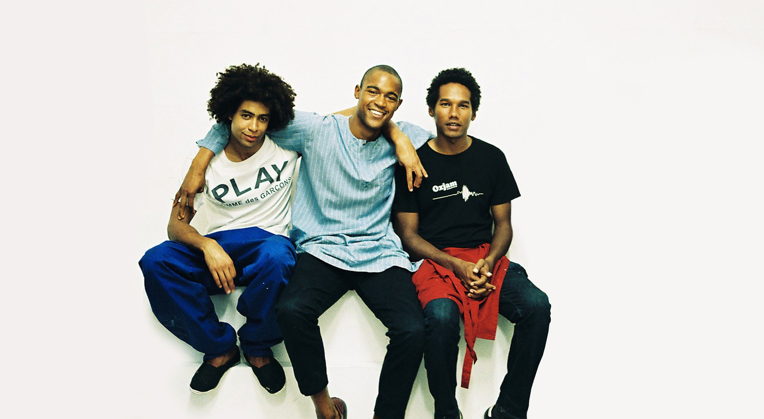 Tell us about The Groundnut – how did it come about and who are the people behind it?

The Groundnut is a food project celebrating African food, which the three of us started together back in 2011. We all have roots in Africa – specifically in Ghana, Nigeria, Sierra Leone and South Sudan – and have spent time living and working across the continent. The Groundnut serves as a great platform to share and explore our individual and collective identity.

We’ve got a copy of The Groundnut Cookbook to give away!

For your chance to win, just complete the form below to sign up to our mailing list – don’t worry, you can still enter if you already subscribe![/vc_column_text][vc_column_text]

What makes The Groundnut different to other pop-up dinner/supper clubs? 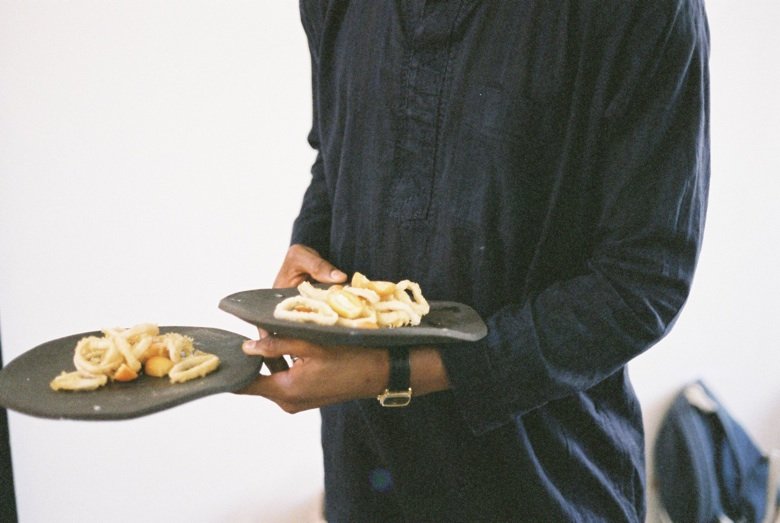 Pop-up dinner probably isn’t the best way to define what we do. We understand why people use it, and we’ve referred to ourselves using the term on occasion for simplicity’s sake. But somehow ‘pop-up dinner’ has a make-do feeling to it, while we strive for homely warmth at our dinners.

The menu is always evolving, so if you come to The Groundnut dinners you’ll never eat the same thing twice (you can get a taste for what we serve here) but I guess something else that sets us apart is how much we invest in the other aspects of dinner, away from the food. We built the long banquet-style dinner tables that we use ourselves and have made special clay plates for our events in the past; and the things that we don’t make are specially selected with a lot of attention to detail. Like I said, we try our best to ensure that our dinners have a communal and inviting atmosphere.

With the recent publication of The Groundnut Cookbook, do you think there’s a place for contemporary African food in the home kitchen? 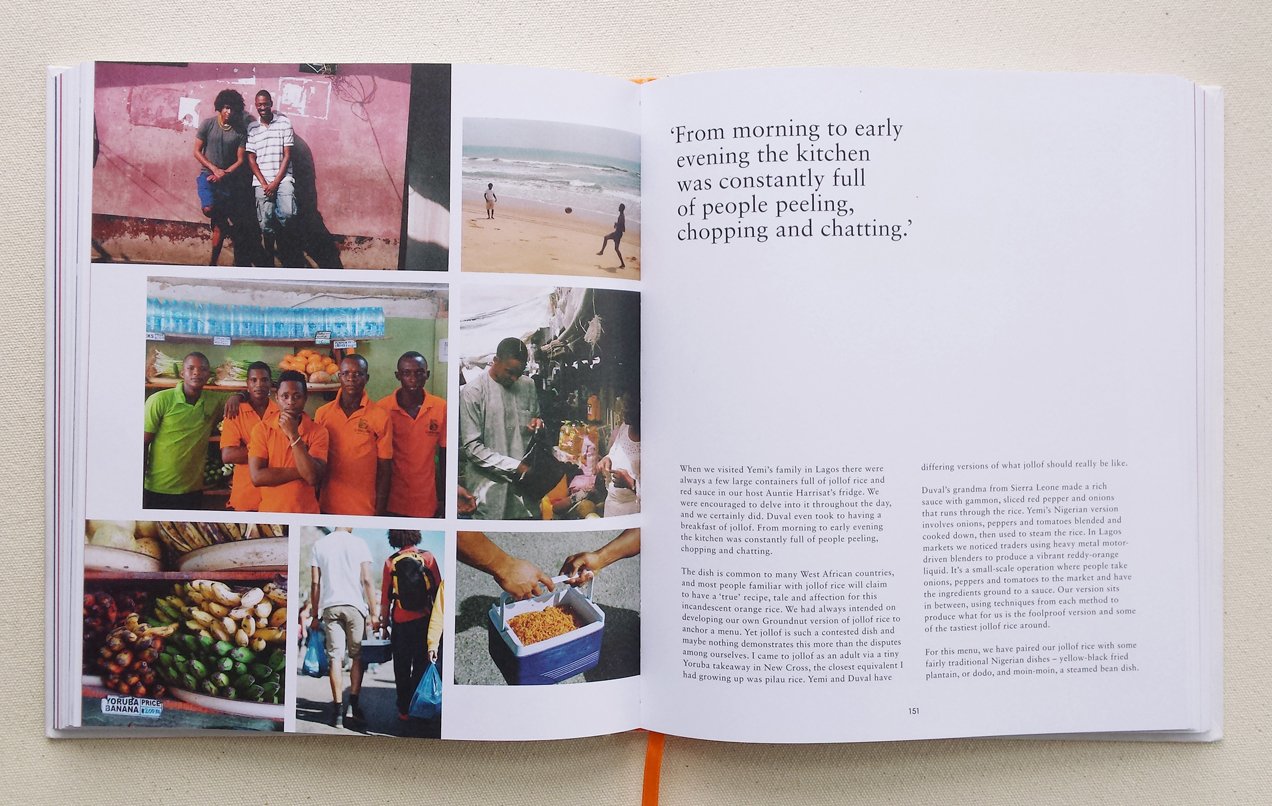 Of course. Although we originally conceived the recipes for our events, we amended them for the book with domestic cooking in mind. The majority of ingredients are readily available in markets and supermarkets so there is no reason why our food wouldn’t work at home. We work hard to make our food as simple as possible, and employ methods that you can definitely replicate. It’s something like a maths fraction. We simplify until we can go no further.

There are one or two exceptional ingredients like yam and plantain that you probably need to get in the cities with African, Caribbean and Asian communities. In our book we guide people on how to select and cook with them in certain recipe introductions. It’s important to inform people so they approach the foods with greater confidence.

Who are your food heroes? 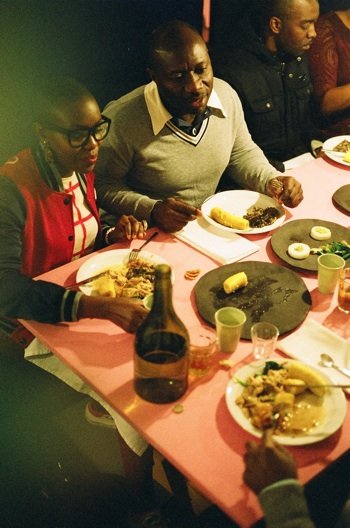 The people at the bottom of the pyramid, the farmers or producers, are often the most interesting people, and the unsung heroes. They have that specialist knowledge and understanding to share, and without them, we wouldn’t be eating so freely.

There are also some wonderful people out there who dedicate themselves sharing the history of foods, as well as the know-how on preparing them. The Kitchen Butterfly has a great site, which revolves around Nigerian food, and another friend has an amazing blog called Dipa’s Daily Dumplings.

I’m Lewisham born and bred so I won’t stray too far from home. Smokey Jerky is a favourite of all of ours, and just round the corner from Goldsmiths. You’ve got to check it out if you haven’t been already. There’s a funny hole in the wall Colombian restaurant at the top of Old Kent Road called La Rinconcita, which is a cosy place to eat too.

Since you asked where I party you’ll find me at MogaDisco, which I co-run with a couple of friends of mine. We usually put on our nights down in Deptford.

Big up Deptford Cinema for their fantastic work too. A nice place to unwind.

Play pick-up football in the parks around London; there’s a great cage at Myatt’s field off Camberwell New Road, and there’s always a good crowd there. Then visit the naan men on East street market. Duval introduced the little hut to me and I always drop in if I’m in the area. 40p for fresh naan![/vc_column_text][vc_cta h2=”The Groundnut: 2015 Season” h4=”4 November – 12 December, 7:30pm @ St John’s Hall” add_button=”bottom” btn_title=”Book Now!” btn_size=”lg” btn_align=”center” btn_link=”url:http%3A%2F%2Fwww.thegroundnut.co.uk%2FGROUNDNUT%2FHOME.html||target:%20_blank”]From November to mid-December, Wednesday to Saturday, enjoy a Groundnut dinner experience at St John’s Hall. Complimentary cocktails and plantain crisps will be followed by a set menu revealed on the night.

Competition T&Cs: By entering this competition, you are joining the To Do List mailing list, from which you can unsubscribe at any time. Entries received after midnight on 12th December will not be considered. The winner will be chosen at random, and will be contacted by email by Monday 14th December. If we are unable to contact a winner and confirm a delivery address, a new draw will take place.

← 5 Frugl Things to Do This Week in London + Win a 1 Month London Travelcard
10th Anniversary. 10 Landmark Productions. Belarus Free Theatre Are Back in London! →