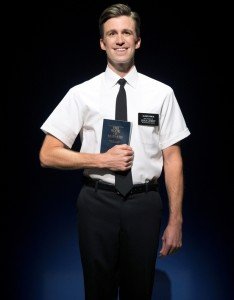 I remember my first introduction to Matt Stone and Trey Parker’s most famous work, South Park. As a pre-teen, I lay on my mother’s bed, excited by a cartoon that had been heavily advertised after the watershed. That first episode, which I watched as my mother did some work next to me, introduced me to the idea of Alien Anal Probes. My mother found the whole episode rather childish (ironic considering I was too young to be watching it), but soon grew to be one of the series’ greatest fans. This was just the start of a long run of episodes that challenged most people’s views of what is acceptable to take the micky out of. Over many years, most religions, most celebrities and most countries were subject to their humorous critique.

So, when entering this nice Art Deco theatre, I knew what I was letting myself in for. It seemed like most of the audience did too, but all were excited and as the curtain rose, a huge cheer erupted as the voice of Trey Parker dictated the story of Mormonism and the opening song started.

“I still have maggots in my scrotum”

Now, I do not want to give any of this story away as to not know the premise is to find the story funnier, but needless to say that you will be surprised where this tale, about one of America’s most controversial religions, takes us. I shall offer you four clues however in the form of nouns: Uganda, AIDS, Female Genital Mutilation (count this as one noun) and Disneyland. Somehow these four subjects are linked through musical parodies that stay in your head once the theatre closes, especially the classic line, “I still have maggots in my scrotum”.

The main characters of the musical are almost physically based upon Matt Stone and Trey Parker themselves, but Stone has become shorter, geekier and fatter whilst Parker has become better looking and less messy and these characters form a perfect odd couple relationship.

So I highly recommend seeing The Book of Mormon, but it seems that it is now very hard to get hold of tickets. I was surprised to see how many people in the audience were above retirement age which shows how Stone and Parker’s form of close-to-the-bone comedy has become accepted in our society. One other surprise in the audience was the presence of a man clearly wearing a terrible prosthetic mask, the type that TV shows use to con the public into believing someone is an old man. As these masks seem to be in TV, it was very conspicuous, especially since he was accompanied by a lady in a red bandana and sunglasses. This is neither here nor there, but this scene off the stage completed an evening of surreal adventure in the stage.

Hang on, he liked it – he actually liked it!

If the epic hype hasn’t put you off, you should really buy yourself some tickets! The Book of Mormon stars Gavin Creel, Jared Gertner, Alexia Khadime, Stephen Ashfield, Giles Terera and Haydn Oakley, and is booking until 14th December 2013.