This week from 16-18 August you get the rediscover your love of the classic fairy tale The Little Mermaid at Camden Fringe. Pond Wife (Get tickets here) by hot new theatre company Holly & Ted remixes the tale in a 90s pop style.

We caught up with Teddy Lamb aka Ted to talk mermaids, a secret deli & a subterranean piano bar in Soho.

Tell us about Pond Wife, what’s it all about?

Pond Wife is loosely based on The Little Mermaid, but with a contemporary twist. We use classic 90s pop music and Lyrics to retell the story in a fresh contemporary adaptation, for example in our tale there is no dashing (yet vapid) prince, the mermaid falls in love with music, and is encouraged to follow her own dreams. 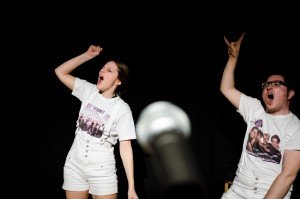 What do you think the appeal of The Little Mermaid is for you?

As feminists, Holly and I were very clear when searching for inspiration that we wanted to reinvent a previously ‘weak’ female character, make her more believable and three dimensional. Mermaids are traditionally thought of to be beautiful and graceful, but voiceless, which reminded us of both lip syncing pop stars. In the original fairytale she gives up everything she has ever known for a man she hasn’t even met yet – we wanted to use the traditional mermaid ‘weaknesses’ as a metaphor for how women are treated and viewed (especially within pop culture) and then find a way to subvert and change the narrative to suit that. We’ve been working on the show for 2 years now, and suddenly mermaids seem to have become the new ‘it’ thing, appearing on t-shirts and phone cases all over the place – so hopefully the new found interest will draw new audiences to the show! 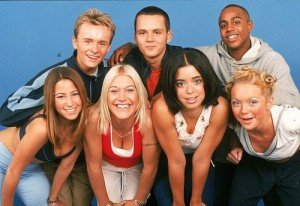 How did you meet Holly and what makes your work together different?

Holly and I have been aware of each other for years, from initially meeting at Playbox Theatre Company as teenagers we then ended up training together at Falmouth University incorporating Dartington College of the Arts. From day 1 at university we began to work together, focusing on our mixture of autobiographical work and fairytales. We studied the work of artists like Lone Twin, Forced Entertainment and Kneehigh as well as immersing ourselves in the works of Beyonce, All Saints and S Club 7. I think our mixture of contemporary performance art, pop culture and feminism make us a unique duo in the current London scene.

What can an audience expect to see at your show at Camden Fringe?

Audiences should first and foremost expect a really fun night out, we use some great music, some great dance routines and a shit tonne of glitter to tell our story, and you just cant help but be swept away!

Who or what inspires you?

We’re inspired by artists from all different genres, from FKA Twigs, Beyonce and Nicki Minaj to Chris Goode, Emma Rice and Alexander McQueen. Inspiration comes from the most unexpected places and thats what makes making theatre so much fun – We never know where out next show is going to come from, or what it’ll look like when we finish! 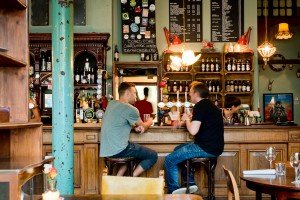 What are your favourite places to go in London? (To eat, to relax, to party etc.)

My favourite restaurant is Mishkins on Catherine Street in the West End, it describes itself as ‘a kind of Jewish deli with cocktails’ and the food is to die for, not to mention the cocktails! Whenever I need to get some work done and can’t work at home, I always end up in either The Red Lion or All You Read Is Love, I’m based in Leytonstone and both of these places are super chill and a great place to get some freelance work done or have some drinks with friends (and The Red Lion do a KILLER roast) As for partying, I tend to always have my best nights when I end up in Trisha’s in Soho at 4am with a bunch of strangers!

I love museums, Museum of Childhood in Hackney is one of my all time favourite places, and I also love the Soho Theatre Cabaret Bar – they have a piano bar down there on Fridays & Saturdays and its only £2.50 (or free if you’ve seen a show there that day!)

← Unusual Things To Do In London This Month | August 2015
Expand Your Mind! Or, 8 Reasons We Went To Malmö →