Regina King impresses on her directorial debut with this classy stage-to-screen adaptation which transcends the limitations of the genre.

Here at To Do List HQ, we pride ourselves on bringing you the best offbeat theatre events in London – and these two beauties are no exception!

We hate writing bad reviews, so we’re delighted to say that both Dreamthinkspeak’s ‘In The Beginning Was The End’ & Robert Lepage’s ‘Playing Cards: Spades’ were BLOODY BRILLIANT! 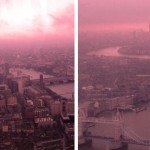 The View From The Shard

Sian-Estelle Petty tells To Do List what it’s like to look down on the city we call home.

What a week for Loserville – we HEART Lullaby, Justin Bond, and Gay Bingo! Check out our reviews here…