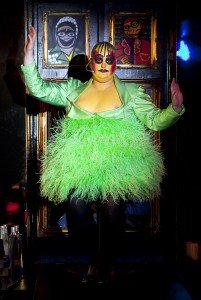 To Do List headed to Brixton at the weekend to catch the site-specific revival of   Taboo at the Brixton Clubhouse. Directed by co-creator Christopher Renshaw, Taboo (for those who don’t know it) is a musical portrait of 1980s London, played out against a backdrop of mass unemployment and social upheaval.

As well as focusing on the fictional story of young girl and boy swept up in this exciting artistic climate, Taboo also focuses on two other notable characters – Leigh Bowery, the brilliant, anarchic performance artist and designer, and George O’Dowd – Boy George to you and us.

We loved every minute of it! There’s no bad seat in the house in this intimate venue, and the performances across the board are brilliant. If we had to choose favourites, then To Do List “STAR” badges would go to Sam Buttery as Leigh Bowery (left), and Paul Baker as Philip Sallon: Paul won an Olivier Award performing this role back in 2003; and if you remember Sam from The Voice, prepare to be amazed!

The songs are fun, instantly memorable, and at times deeply moving – and of course, there are a couple of old Culture Club favourites thrown in. But don’t just expect a frothy camp-fest – there’s a serious story here beneath the outrageous outfits, although it has to be said, you’ll be leaving with a smile on your face.