Stephen Rose is co-founder of Sexbeat and one of the organisers of RADFEST (19th August) which, in collaboration with Swedish denim company Nudie Jeans, will feature bands such as Veronica Falls, Ceremony, Jacuzzi Boys, FIDLAR, Diiv, VIRALS, Eagulls, Fear of Men, Holograms and Maria Minerva.

Listen to all the bands for FREE on Soundcloud here! UPDATE: Full line up at the bottom of this page! 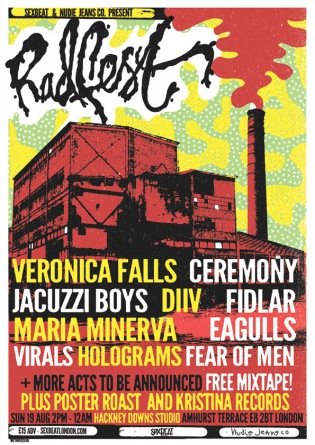 SEXBEAT has been a leading light in London’s diy music scene since 2007, renowned for unique live shows by acts like Ariel Pink, The Men and Salem in a host of alternative venues ranging from hidden vaults to 17th century churches to River Thames cruises.

Their popular blog sexbeatlondon.com is a go-to guide for the latest in emerging new bands and features listings of their countless upcoming live events.

SEXBEAT Records exists as an online store on the blog, where their releases for bands such as Virals, Eagulls and Fear Of Men can be bought direct from the group.  As well as festival stages at SXSW, Beacons, Camden Crawl and the Great Escape, SEXBEAT’s key date in the calendar is their annual one day festival RADFEST, which is expanding every year.

We caught up with Stephen Rose, co-founder of Sexbeat, to grill him on some of his hot tips of things to do, places to go yadda yadda in London…

Alan’s Records in East Finchley is the best thing about London by far.  It’s a pretty hidden away, old school – second hand record store, run by a total legend who loves records more than anything else.  He told me once that he had to start his own record store because he “kept getting fired from other people’s”.  That’s the kind of guy that I want to buy my records off!  He doesn’t even have a website.  Support your local legend here:  218 High Road  London N2 9AY – 020 8883 0234 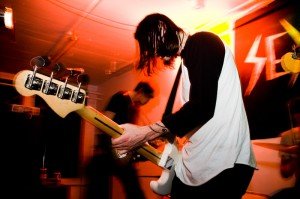 We had a gig on a boat sailing down the Thames this month, so we’d ideally like to go to a gig in a graveyard this month, if possible.  I’m not sure if anyone is doing this, so we may have to organise it ourselves.

Sometimes we cycle to brighton to keep ourselves out of the pub for the day.  80 miles just so we don’t have a hangover the next day.  Stops you spending money pretty well too.

I don’t know what this means? 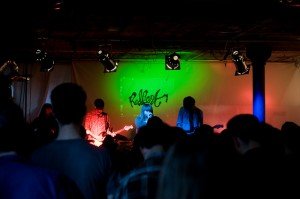 We’re currently working on our annual one day festival, RADFEST (on the 19th August) which is in collaboration with Swedish demin company, Nudie Jeans (http://www.nudiejeans.com).  So far we have confirmed:  Veronica Falls, Ceremony, Jacuzzi Boys, FIDLAR, Diiv, VIRALS, Eagulls, Fear of Men, Holograms and Maria Minerva.  You can listen to parts one and two of our sound cloud mix tapes below.  The next (and final) five bands will be announced next month.

You can buy tickets here: http://www.ticketweb.co.uk/sexbeat

And here’s the line-up:

VERONICA FALLS
The indie-popfour piece released their full-length self titled debut in 2011 to critical acclaim, culminating in a recent headline show at Scala earlier this year…
_

CEREMONY
Bay area hardcore punk from this San Franciscan five piece. Formed in 2005, Ceremony were recently picked up by Matador Records who released the thrash heavy Zoo album in 2012

JACUZZI BOYS
Garage punk stalwarts and SEXBEAT regulars; the Miami three-piece have played a sold out show at the Shacklewell Arms and our SXSW showcase in recent times…

EAGULLS
The Leeds based punks have a five track EP scheduled for release on SEXBEAT in July. It’s a mix of their new-found slacker approach with the more brutal sound of their earlier work…

VIRALS
The latest project from former Lovvers frontman Sean Hencher. A debut 7″ Magic Happens / Comes The Night on SEXBEAT in January was followed by an EP via Tough Love in June…

DIIV
DIIV is the nom-de-plume of Z. Cole Smith, musical provocateur and front-man of an atmospheric and autumnally-charged new Brooklyn four-piece…
_

FIDLAR
Sometimes you need to be lubricated to get the fuel that drives the bratty, playfully druggy, unseeingly tight-but-sloppy punk anthems that define FIDLAR…
_

MARIA MINERVA
Estonian-born, London-based Maria Juur magnifies the idea of bedroom-ballads-turn-dirty-dance to the umpteenth power with her pleasure/pain vocals and synthphonies…

HOLOGRAMS
These Swedish punks are part of the Captured Tracks stable. Despite being perpetually too poor to drink dusted dive-bar drafts, they still manage to projectile vomit their fare share of poison…

FEAR OF MEN
A band from equal parts Brighton and London, Fear of Men have existed for a little over a year but have already played shows with the likes of The Antlers, Vivian Girls, Iceage and Best Coast…

TRASH TALK
The Sacramento hardcore band bring their intensive live show to the UK. Recently signed to Odd Future Records, new album 119 is set to be released in October…

SSS
Thrash metal songs jolt into life with immediate brutality. The Liverpool based band have brought elements of death metal, prog rock, classic rock and grindcore into their punk/metal mix…

GABRIEL BRUCE
Recalling the raspy drawl of Cohen, Cash and Cave, Bruce’s depths go beyond the tonal quality of his vocals adding a stomach churning maturity to this year’s line-up…

HALLS
Electronic musician Sam Howard released a new EP in January, one that saw the young South London artist using pianos and strings, to move away from a primarily synth-driven sound…

THRONE
Throne have been SEXBEAT regulars this year, having supported the likes of The Men and playing out SXSW and Great Escape shows. The three piece can induce a heavy, noisy paralysis with their enrapturing, dark stoner doom…