State of Disarray, purveyors of some of the most awesome and amazing attire you’re ever likely to find in a field, are bringing their fantastic fashion creations to a Pop-Up Party Shop in East London this October!

Ahead of their week-long Brick Lane Invasion (October 1-6) – an exclusive opportunity to snap up a piece of fashion history and score yourself some limited edition leggings, designer bumbags, spandex space-suit, traditional tailcoats and more State of Disarray costumes than you can shake a stick at – we caught up with Captain Disarray herself, Tabitha Green, to find out what tho whole crazy thing is about! 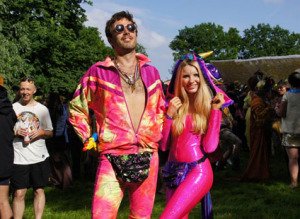 Tell us about State of Disarray…What makes your style different?

State of Disarray is an explosion of imagination which has been spun into outrageous outfits to make you feel fabulous! The concept comes from my inability to focus on one form of fashion alone and eagerness to constantly try different styles and learn new skills as a designer. I finally decided to stop criticising my indecision and started celebrating the creative carnage it instead. So I established the State of Disarray, declared myself Captain and launched a ‘reckless fashion revolution’ where across my collections clashing is complimentary, more is more and fashion is fun!

Where do you draw inspiration from for your designs? 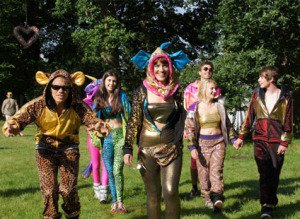 st outrageous work comes from the mayhem of my imagination and just wishing that, for example, an ‘Ultimate Disco Lizard suit’ existed and then doing my best to make that happen. Other people’s imaginations excite me just as much – one of my favourite things about humanity is our ability to be silly and desire to dress-up. At festivals I fall in love every five minutes! I shed a few tears of joy at Shambala this summer when I watched two teenage ravers in sparkly sardine suits having a dance-off with a middle-aged women dressed as a giant squid wearing a beard…it just doesn’t get much better than that! 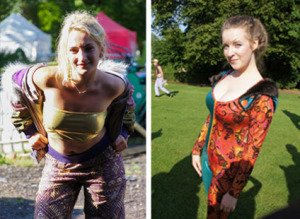 What advice would you give to those who may be shy to try your more extreme pieces?

Just give it a try guys! Seriously, the number of new recruits who have written to me to say how these outfits have changed their lives – it’s amazing! From men daring to wear leggings for the first time to self-conscious teens trying out a leotard to pro-levellers defying convention and wearing a Unicorn suit to their own wedding. Join the revolution! Seriously, when you hit the dance-floor dressed as a Disco Fish, everyone wants to be your best friend because you are having all the fun!

What are your favourite free & cheap things to do in London?

Hmmm, tricky… I’ve just returned to London for the first time in ten years since graduating (Goldsmiths) and living in Vietnam, so I’m just rediscovering it now. So far, Dalston Car-boot sale on a Sunday – it’s full of amazing characters and incredible bargains. Last week I picked up a ‘MyTribe’ jumpsuit and a pair of Tropic-cool fruit braces for a fiver…RESULT![/vc_column_text][/vc_column][/vc_row]