Get Fit or Die Laughing 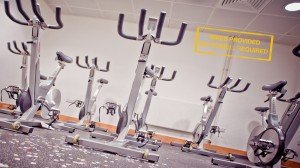 We’re all told that we should take fitness seriously, but why should we when it can be this funny?

Trade in the endless reps and macho exhibitionism for a once-in-a-lifetime shpin class with Clement – a man in love with a piece of gym equipment, and full to the brim with past demons.

Oh, and did we mention 2-for-1 Sunday? Yuhuh, book online here and choose a Sunday performance, and you’ll get two tickets for £10! Bargain!

After a startling Edinburgh debut in 2011, Sink or Shpin, the world’s first comedy show with an audience on bikes, arrives in October 2012 to entertain London.

Recovering from a disastrous marriage, Clement has found salvation in indoor cycling. Together with his beloved Brigitte – spin bike and companion – Clement has ventured far from his native Perpignan to Boom! Cycle in Shoreditch. He’s having a whale of a time as a newly qualified instructor, but can he keep past demons in check?

Join us at this unique venue, Boom! Cycle Studios, and climb aboard a bike for the most extraordinary class you will ever take. No fitness is required – Clement is not in his prime!