To Do List is super-excited about SCALA BEYOND, which kicks off its 6 week nationwide film season this weekend, and promises to celebrate all forms of cinema.

We know we’re (mostly) London focused, but SCALA BEYOND is all over the place: LONDON – EDINBURGH – MANCHESTER – BIRMINGHAM – NEWCASTLE – SHEFFIELD – GLASGOW – BRIGHTON – DERBY – ISLE OF WIGHT – OSWESTRY – WESTCLIFFE ON SEA… AND MORE.

We Say: Westcliffe on Sea? But no, seriously, we love the sound of the film festival, which really promises to bring all possible kinds of cinema to the whole country. We’ve picked out a few highlights below, but first…

Following 2011′s Scala Forever film season in London, the team behind it are back with Scala Beyond, a six week season celebrating all forms of cinema exhibition across the UK, from film clubs to film festivals, picture palaces to pop-up venues and even venturing into homes and schools. Scala Beyond shines a spotlight on the people and organisations who keep independent exhibition in the UK alive and thriving. Operating like a fringe festival, Scala Beyond is open to event submissions and proposals from any exhibitor, individual or group from across the country.

⬇ Scroll down for our highlights ⬇

To celebrate the release of Peter Strickland’s (KATALIN VARGA) new film BERBERIAN SOUND STUDIO at Curzon Cinemas from 31 August, Ten Rounds with De Niro, the monthly film quiz at Curzon Soho, have prepared a special themed quiz around horror films, soundtracks and giallos, perfect for any Scala Beyond fan.

LUX, the international arts agency and artists’ moving image archive, teams up with Little Joe, a magazine about queers and cinema, mostly, to commemorate and celebrate the life and legacy of Amos Vogel, founder of the legendary film society Cinema 16 and author of the indispensible ‘Film as a Subversive Art’, who passed away in April 2012.

Scala Beyond and the Independent Cinema Office present I WANT TO START A POP UP CINEMA @ Portobello Pop Up | 24 September | 19:30 | FREE

Over the last few years, the UK has seen a multitude of cinemas popping up in the most unlikely of places: on rooftops, under motorways, on boats and in petrol stations. But how easy is to run these pop-up cinemas and where do you start if you dream of having your own? Join members of the Scala Beyond network and the Independent Cinema Office as they host a special event for both newcomers and established exhibitors that will shine a light on the challenges and benefits of creating your own cinema from scratch. 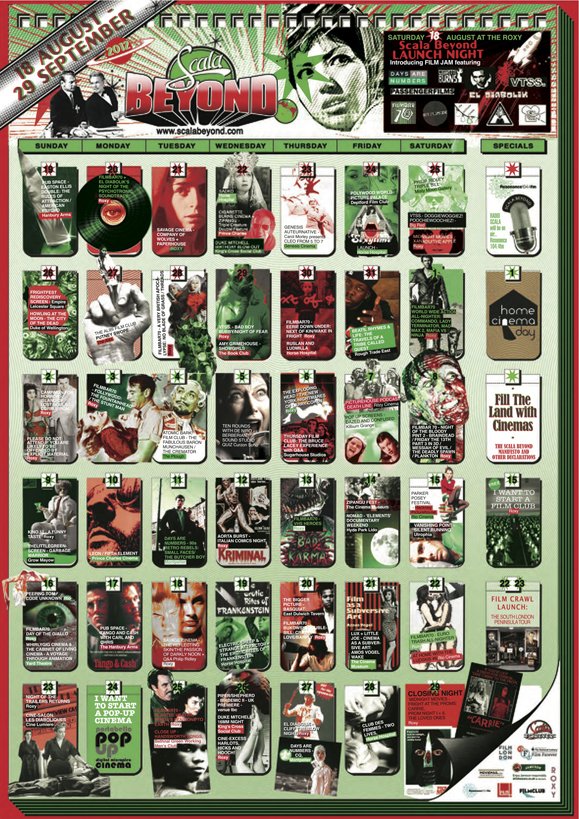