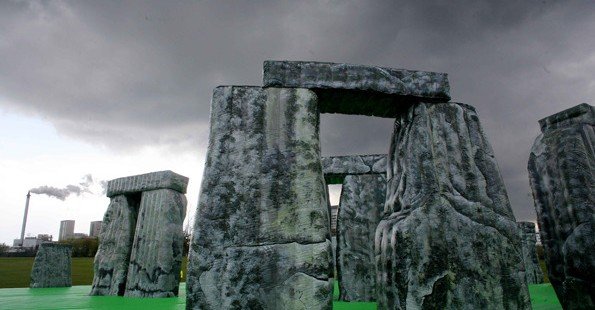 Fancy a bounce on Stonehenge? Sacrilege is coming!

Jeremy Deller’s life-sized inflatable replica of Stonehenge, Sacrilege, is upping sticks from its Glasgow home, and bouncing around the UK…

A co-commission between Glasgow International Festival of Visual Art and the Mayor of London (Boris isn’t just all about the bikes you know), Sacrilege was a bit of a hit when it popped up in Glasgow earlier this year. Now, with support from Arts Council England, it’s romping around the country as part of London 2012 Festival.

A lot of my work deals with history, and Sacrilege is no exception, this is a way to get reacquainted with ancient Britain with your shoes off.

Want to be famous for 15 seconds or so? Well, you can upload photos of you and your inflatable-loving friends bouncing around on the installation onto Flickr to create a gigantic on-line clan (apparently). To check opening times and local weather conditions for each venue, you could probably do worse than following Sacrilege on Twitter @Sacrilege2012.

← Ellie Stamp, immersive performance superstar for Coney, shares her London To Do List
Harry Blake, composer of Rhinegold at the Yard Theatre, shares his To Do List →