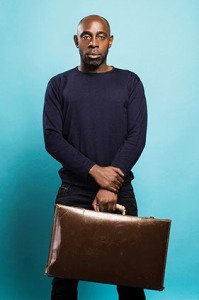 We experienced the magic of Roundabout, the pop-up spaceship theatre venue from Paines Plough, at the Edinburgh Fringe – and now it’s landed in London!

The portable 168-seat pop-up amphitheatre in-the-round is brought to us by the UK’s national touring theatre of new plays, Paines Plough, and their collaborators.

The circular beast is pitching up at Hackney Downs Studios to present an impressive lineup of new theatre including some of the top treats from #EdFringe as well as a brand new show, ‘Cutting Off Kate Bush’.

Scroll down to see the highlights…or simply watch the hypnotising trailer.

A British couple are seized by Somali pirates. In East London, a Somali taxi-driver decides to rescue them. Meeting disbelief with determination, he dismisses his wife’s fears and flies out to negotiate their release.

A couple are deciding their future. Thirty-something, educated, thoughtful, they want to have a child for the right reasons. But in a time of overpopulation, erratic weather and political unrest, what exactly are the right reasons?

You’re six years old. Mum’s in hospital. Dad says she’s ‘done something stupid’. She finds it hard to be happy. So you start to make a list of everything that’s brilliant about the world…

Two terrible twins with a talent for turmoil rule their school with terror and tyranny – until the arrival of a new head teacher with green scaly skin, sharp gnarly fangs, and a long spiky tail…

Meet Cathy. 27, having a crisis and venting on YouTube through the medium of Kate Bush.

Oh yes. It’s really happening. Who knows? Perhaps she’ll get a million hits and become famous? Or not. Just thank God no one is watching her. Yet…