Okay. So. Don’t panic. Keep calm. Breathe. It’s happening. Someone’s pulled the plug out on the big 1990s machine, given it a blow and rammed it back into the socket. Our childhood is rebooted.

Robot Wars is coming back.

Robot Wars is coming back.

Obviously, re-makes of classics aren’t destined to be successful. Robot Wars could very possibly stagger back as a tired old format which can’t compete with the technological glitz and glamour of 2016 and we’ll all feel a little bit silly for ever thinking it was a good idea to resurrect it. After all, we’ve got drones now. We’ve got holograms now.[/vc_column_text][/vc_column_inner][/vc_row_inner][vc_column_text]

OH MY GOD A HOLOGRAM DRONE IN ROBOT WARS! 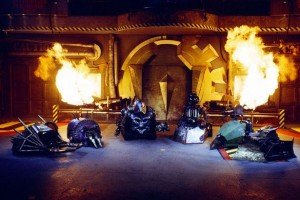 Of course Robot Wars is going to work in 2016. We’re going to have robots powered by tweets. The new champion’s going to be a Tesco self-service check-out machine.

And Robot Wars coming back is the most unexpected item in the bagging area of 2016 yet.

Really though, it’s something which if it never happened at all, we couldn’t really complain. It was niche. It was geeky. It was gimmicky. It was style over substance. It was a one trick pony of a programme.

Except it very quickly became so much more.

It wasn’t just about Craig Charles in all-over leather. It had all the heroes, enemies, plotlines and twists of American wrestling except… It was real. So very real. It put the geeks of Britain and then the world on a pedestal. It got living rooms talking about sockets and circuits until terms like self-righting mechanism were as common place on a Sunday as roast potatoes, carrots and swede. 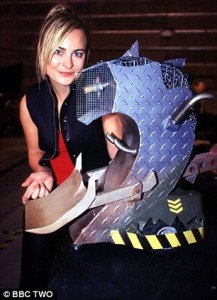 It had absolutely everything. Jonathan Pierce before Match of the Day. Philippa Forrester was bae before bae. It had men clutching remote controls as their mid-life crisis clutched them. It had the professionals. It had the have-a-goes. It had families who’d found a mutual hobby. It had the father and the adoring son duos whose eternal relationship would come down to that teamwork of one of them in charge of steering and the other one the weapon. It put emphasis on engineering, creativity and brains as the fuel for hopes and dreams.

And so, perhaps, could we. We, the children of the nineties. Many of us in that weird purgatory of adult but still child. Many of us still living at home. Many of us not really sure what’s next. Robot Wars’ return is a sign that we’re not babies anymore, just like how we’re now hearing new songs which remix old songs we had on our MySpace. 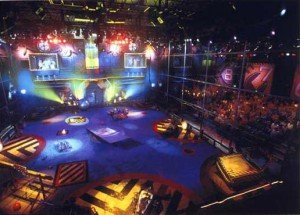 But when Robot Wars hits our screens again, it’ll make us children again. It’ll be like a shot in the arm against the clogged-up world of adulthood. Smelling salts. A pep-talk. The greatest reality check in history.

You are a child of the nineties and this programme is yours. So be more Bash. When the world pisses you off, show it your Matilda-chainsaw arse. Grab today like Killalot and…