We’re mega-excited about Prometheus Awakes, the sure-to-be-amazing reinterpretation of the Greek myth coming to the Greenwich & Docklands International Festival in June, courtesy of Graeae and La Fura dels Baus.

Ahead of what looks like one of 2012’s must-see events, we caught up with Amit Sharma (who Co-directs with Pera Tantiñái) to find out how things are going, and what’s on his Summer 2012 To Do List…

So, How did you come to work with Graeae?

I was at university studying to be a director in TV and film when a letter dropped through my letterbox and landed on my ‘Wipe Feet Here’ doormat. The letter was from the London Disability Arts Forum, whom I had never heard of, stating that a company called Graeae Theatre Company were setting up a course named Missing Piece. The course was designed to fill the shortfall of deaf and disabled actors who weren’t able to get into drama schools because access and attitudes were creating a ‘lost generation’ of artists. That was 12 years ago and I’m not too sure if things have changed all that much. I kid you not when I say that if it wasn’t for the Missing Piece course then I would probably not be where I am so I owe a lot to Graeae. 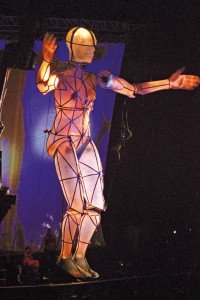 It’s a huge pleasure to be back at Greenwich+Docklands International Festival (GDIF) and to build upon our relationship which has been on going over the last 4-5 years. The show also gives Graeae the opportunity to develop our relationship with Stockton International Riverside Festival (SIRF) who are also co-commissioners. We’re incredibly excited about the collaboration with La Fura Dels Baus as their reputation with outdoor international work is of an incredibly high standard. It made total sense for us to tell an epic story like that of Prometheus, drawing on the strengths of both Graeae and La Fura to create what is going to be a completely extraordinary experience. 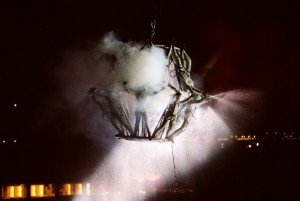 Can you give our readers a sneaky exclusive about Prometheus Awakes?

I don’t want to give too much away, as the show is set to have many spectacular elements to surprise the audience, but if you come down to GDIF or SIRF you will see a giant walk amongst men in this fiery feast!

How did the collaboration come about between Graeae and La Fura dels Baus? Did you know a lot about La Fura before you embarked on the project?

Bradley Hemmings, Director of GDIF and co-artistic of the London 2012 Paralympics Opening Ceremony with Graeae’s Jenny Sealey, asked us if we would be interested in getting involved. We hadn’t heard of La Fura before but quickly got to know about them. Our first meeting took place in Barcelona talking about eight-metre tall puppets, things flying in the air and most importantly the script to the story. Pera Tantiñá from La Fura (who is co-directing the show with me), has incredible enthusiasm about him which is hard not to be affected by. We quickly understood that both companies had their specific areas of expertise but the common theme throughout was that we both create and story-tell in inventive ways. With this also being Graeae’s biggest outdoor show (indeed the UK’s first large scale outdoor performance led by deaf and disabled artists) I wanted to make sure that the brilliant work Jenny has done continues in outdoor theatre. 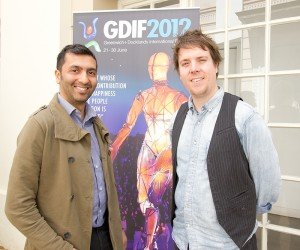 What are the aims and overarching themes of the project from Graeae’s perspective?

For me one of our aims is to show everyone that anything is possible. I think the investment and the subsequent boom in deaf and disabled art has made people sit up and take notice. The quality has always been out there and now I believe deaf and disabled artists are starting to get the recognition that they deserve. Graeae has always been at the forefront of disability art and I hope that Prometheus Awakes will allow audiences, artists and anyone else to see that anything is possible. It’s incredibly exciting!

How important is accessibility to the show?

I don’t think any other company does accessibility like Graeae, so it’s incredibly important. It’s not just the aesthetic of access which is integral to our work but also our approach to access for audiences, production staff, and venue staff so that when Graeae is in town everyone is supported. We truly believe that anyone should go to the theatre and not in a ‘ticking boxes’ kind of way. For a non- disabled person thinking about going to see a show, the choice might be restricted by monetary means. For a deaf or blind person it is restricted by, in many cases, there only being one sign language interpreted, captioned or audio described performance. I think what we show to the rest of the theatre world is that the aesthetic of access doesn’t have to be staid or functional. It can be fun, atmospheric, artistic and clever so that the same audience can get information at different times. The relationship with the actors and the audience is constantly alive which is what theatre should be about.

What is your ultimate To Do List for Summer 2012?

Handspring’s The Crow which is at GDIF

← Museums at Night 2012 – Our top 5 picks for this weekend!
Uncovered: Photography Exhibition by Daniel Regan and Agata Cardoso – Free →