We caught up with one of the best up-and-coming comedians in the United Kingdom, Pierre Novellie, to talk being cool, being funny, being a bad audience member & MORE! 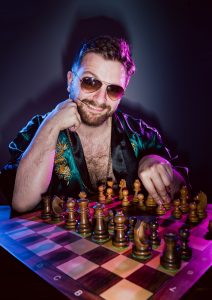 Hi Pierre! Or is it Peter? Intriguing… Who is Cool Peter?

He’s an abstract representation of how difficult it is to name a show.

How cool would you say you are on a scale from socks-and-sandles to Bowie-and-Bing?

Who is the coolest person in comedy right now?

You started out with the Cambridge Footlights – no pressure there, then! Did that feel like an important step at the time?

It mostly just felt like messing around doing comedy with your friends! People will hold it against you if they find out you did it so you have to be discreet.

Who are your comedy heroes?

Every single audience member who, upon being asked a simple, meaningless question by a comedian, realises that the answer needs to be rapid and brief rather than fully accurate.

Who are your comedy villains?

Every single audience member who, upon being asked a simple, meaningless question by a comedian, decides to:

Finding that the rewards of Warhammer might not have been quite so worthwhile as he thought in his youth, Pierre Novellie picks his way through an equally perilous adulthood, littered with rats and chicken bones – and that’s just the journey to the end of his street. That’s not cool. But then a dawning realisation that very little is cool helps Pierre start to feel good after all.

← #WinTickets to see ‘Our Ladies of Perpetual Succour’ in the West End
The Macbeths Pick Their Favourite Karaoke Lyrics! →