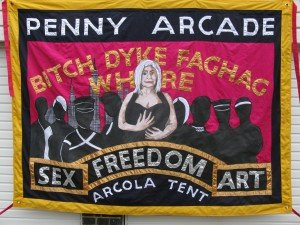 “I’m hard to interview because I just f*cking talk.” Explains Penny Arcade, half way through her Q&A above the Hospital Club on a stuffy London evening.  The audience laughs. It’s very true, but luckily for us, listening to Penny Arcade talk is an absolute joy.

Cutting ad-libbed true life stories about hanging out with Quentin Crisp and being a Warhol Superstar, with monologues from her seminal show Bitch! Dyke! Faghag! Whore! Penny Arcade sheds a refreshing light on modern notions of acceptance, identity and queer culture.

The original queen of the New York cabaret scene has come to Dalston because “The electric blue light of creativity which used to hover over Paris and New York now hovers over London.”  First performed in the 90’s, Bitch! Dyke! Faghag! Whore!  explores what Penny describes as “real eroticism”, a mixture of dance, comedy and storytelling which ultimately aims to unearth a sense of truth for both audience and performers.  She’ll be joined on stage by local dancers in a run at the Arcola Tent this summer, which is set to have as much impact as it did when it first hit cabaret bars twenty years ago.

Now in her 60’s, it seems Penny has lost none of her charm or political edge.  “I’m in the youth of my old age.” she smiles “No 25 year old out-rocks me”.  If you can catch her show, you should.

Book online now for one of our highlights of 2012 here

Here’s what they say about the show:

“The show has everything you wanted to know about censorship, feminism, counterculture and joy” Jeff Buckley, Rolling Stone