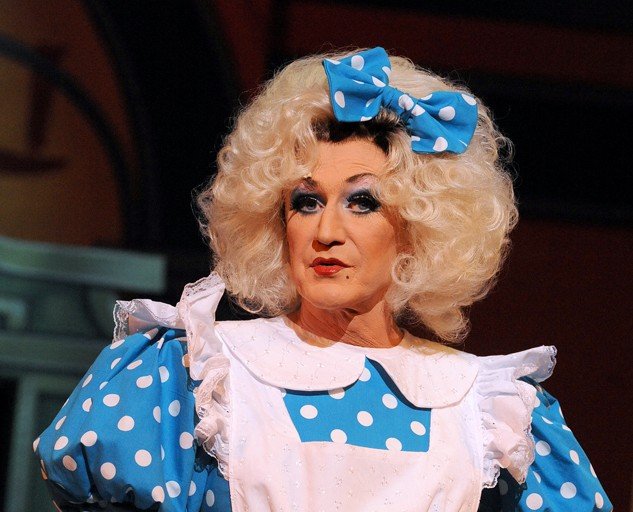 We’re mega excited about seeing Lily Savage in Aladdin: A Wish Come True at The O2 this Panto Season

Paul O’Grady has been talking about how his alter-ego is looking forward to it, and about how he’ll be spending Christmas – here’s what he had to say…

“The Arena’s no place for panto, it’s too big, so they’re building us a theatre. I expect we’ll all be in portacabins round the back, hovering over a fan heater, but no doubt but it will look lovely out front.”

On the Lure of Panto

“I love the insanity of it all! Although if you asked me that question the third week in I’d turn on you and say nothing! I hate it, I want to go home! But I love it really. You’re in this family for four weeks and if you have the three ‘Gs’ – a great company, great audiences and a great production – then you’re laughing. I couldn’t think of a nicer way to spend Christmas.”

On How to Keep the Audience Happy

“You’ve got to keep the story going. Don’t just wander out and tell a few gags. It’s really important to tell the story. Ours opens with a funeral – the kids’ love that, with all the thunder lightning and the dry ice – and they’re burying Widow Twanky’s husband. It’s a prologue so you find out how Widow Twanky ended up in Peking running a laundrette; you get the back story. And when you have a really good script like ours it enables you to stray off for a bit. I chat to the audience and tell them me woes, but you don’t want to be going overboard; you’ve got a crew there who want their lunch and people who want to get the bus.”

On Christmas at the O’Grady Ranch

“I have all the friends round and I cook a big Christmas dinner. Honestly, if you walked into my house you’d think ooh! Someone in this house absolutely adores Christmas; a lovely tree, holly, ivy and mistletoe around the banisters – you’d think Kirsty Allsop had been in working overtime! But I do it mechanically. But what drives me mad is when Christmas starts in September. Mince pies in September! And the panic buying! The shops are open on Christmas Eve and Boxing Day and you’ve got people buying ten loaves!”

“I’ve got nine pigs, ten sheep, four barn owls – it’ll be like Hogwarts here soon – two goats, four dogs and loads of chickens and ducks. It’s ridiculous! And then I’m filming at Battersea and I’m looking at this little dog, Cracker, that’s taken a shine to me and I’m thinking no, you can’t.”

On What he Would Wish For if he had a Genie

“A good blast of sunshine, just for a week, to give us all a treat before Christmas. I’m quite happy with my lot, but I’d ask for a big pot of money to give away to mates and charities that really deserve it. You could be a great benefactor then. There’s no point having it and just sitting on it.”

On Who he Would Banish to The Cave of Wonder?

“It would be a very busy cave! And not only would I shut ‘em in but I’d fill it full of ice-cold water, just waist level, and then I’d break the sewer pipe. Then and I’d go in and cheer myself up watching them all being miserable! But there’s nobody I really hate so I’d have to go in and let them out and say I’m awful sorry; I just had the hump this morning. I’d be a terrible dictator, I’d invade a country and then have to say sorry, we’ll just have our dinner and go – I’ve changed my mind.”

Tags: aladdin, christmas, interview, london, o2, panto, paul o'grady, theatre, to do list
← All That Glitters Is Here! The To Do List Guide To A Shiny Happy Christmas
Doggie Christmas Pics – Thanks to BOWOWOW! →