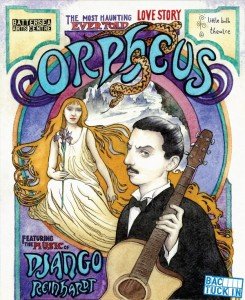 Make sure to see Little Bulb’s follow up to the amazing Operation Greenfield, which we saw at the Soho Theatre back in 2011. We’re extra excited about Orpheus because  this is an intriguing re-imagining of the Greek myth – set in 1930’s Paris to a live score of Django Reinhardt’s Hot Club jazz, the production promises to be an evening of 20th Century glamour brimming with music, myth and mirth. 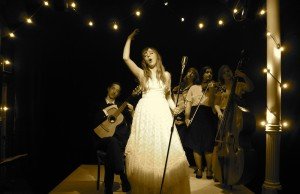 They Say: “Prepare to be transported to 1930s Paris where legendary musician, Django Reinhardt, has been cast as the lead in a new production of Orpheus.

Your host for the evening is the charismatic songstress Yvette Pépin. With her troupe of operatic players she will perform the thrilling tale of Orpheus’s ill-fated descent into the underworld to reclaim his lost love, Eurydice.

Set to a live score of hot club jazz, opera and French chanson, Orpheus is a musical re-imagining of the epic Greek myth.”

Performances will be accompanied by live musical interludes and late night dancing on Fridays and Saturdays. Click here for more info, and to book tickets.