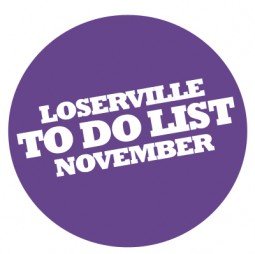 Remember, remember the month of November

We believe November is shaping up to be slightly wonderful actually. This To Do List of joy includes Wunderbar Festival, Dracula: Sex, Sucking and Stardom, GFEST, Scottee’s ‘Violence’, La Soiree, Paintworks, EastEnd Cabaret and much more.

Ok so this is not strictly in London (in the same way that New York isn’t strictly in Mexico), but we believe the Wunderbar festival is totally worth a road/rail/air-trip! This year the odd and quirky performance festival is back with an interactive bang, it’s all about you! Our top picks include Bring a Pet (to make a makeshift zoo), Work-a-thon (the world record for the largest gathering of self-employed people working together) and the Human Library.

Micro-budget? Check. Award-winning comedian making film debut? Check. Disgraced TV actor? Check. We’ve all had bad dinner party experiences, but this should reassure most of us that it could be a lot worse… “The Thompson family is accused of murder when a stranger dies at their dinner table. Six months later, family friend Tim visits freelance therapist Dr Eric Sacks (Simon Amstell) and the story finds its way to the press. The facts are bent and the details spun as the Thompsons become known to the public as ‘The Family of Killers'”. Puts Bridget’s blue soup into perspective, eh?

From the creators of Secret Cinema comes the first global film festival where anyone can take part. Find out how to take part here.  Future Shorts’ defining format showcases a single programme of the best short films from around the world often alongside live music, DJs and art.

Divinely silly infusion of  music, naughtiness and slapstick, not forgetting Dracula. The story goes like this: “Jonathan Harker is tempted by the evil Count and a love of all things showbiz. But will he overcome temptation and stop Dracula’s vile plans to marry Lucy, take over the world and star in an Andrew Lloyd Webber musical? The stakes are high, but if they win the day they shall rid the world of a villain and be immortalised in drama by actors in north London…”. We think this will be strangely wonderful.

Forget the West End, there’s a lot of great performance mayhem coming from East Laandon of late. The Arcola Tent is the new outdoor comedy & cabaret hub in Dalston, which is going to cause a storm. Our highlights include the fabulous East End Cabaret, whose filthy Weimar charm has warmed our cold winter’s hearts, time and time again (be sure to request To Do List’s favourite song ‘Dangerwank’, hehe).  Also coming up is Freeze, which pairs two of our favourite oddballs, Tim Key (poet extraordinaire) and Tom Basden (geeky musical raconteur).

A great mini festival focussed on the best of LGBT arty turns, GFEST is a platform for lesbian, gay, bisexual, transgender (LGBT) and queer artists, organisations and venues to promote LGBT and queer arts. GFEST features established alongside fresh or young LGBT artists and queer talent across the arts, including visual arts, theatre, dance and performance, LGBT short films, debates, workshops and parties.

Paintworks presents an exhibition reconnecting with all the people who have worked in the well-known art shop in Dalston. The exhibition will showcase the extraordinary and diverse talents of 45 artists in the Ideas Generation Gallery on Redchurch Street. Our favourites (not that we have favourites) are Marcus Hessenberg, Liam Scully, Tabitha Fedden and Roy Willingham.

We’re very excited that this whirlwind of a show returns to London. The genre-defying Eat Your Heart Out collective present their examination of the tougher side of life: violent vignettes, disorderly displays and spitting. In a world of gloss this challenging, entertaining and anarchic romp should not be missed.

We heart zines! Let’s go and buy some together! This event at St Bride’s promises to be a charming festival of artistic DIY talent.