We caught up with the impressively bearded Aussie Nick Cody to talk about his show Beard Game Strong at Soho Theatre coming from 15 Feb. 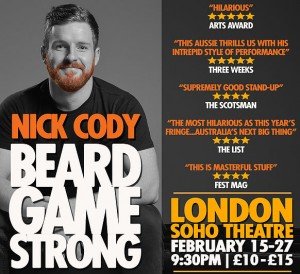 What’s the idea behind the show, we’ve heard it’s no gimmicks? So what’s your take on comedy?

I guess my take on comedy and what I attempt to do is to be as funny as possible, on my terms, in the allotted time. There will be no tugging at the heart strings, just funny stories from my life and poorly thought out opinions on things I find soft.

What are the differences between Australian audiences & British ones?

I find most people just want to have a good time…and that’s everywhere from Australia to South Africa to Canada to Afghanistan. Let’s hope people in London are up for a good time…because I’m going to do my best to make sure it is one.

What is the importance of your beard to you?

It keeps me from looking like a teenager and has been classified as an “SAS beard” from Victoria Cross recipient, Mark Donaldson. Those are both equally as important to me.

Who do you find funny? 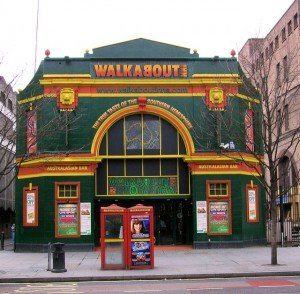 What are you looking forward to doing whilst you’re in London for your Soho Theatre run?

As it’s my first proper time in London, I look forward to walking around, soaking it in and checking out beautiful historical sites like the Walkabout pub chain.