First Look at the new Design Museum: ‘Fear and Love – Reactions to a Complex World’ Exhibition

This opening exhibition at the new Design Museum presents eleven installations exploring a spectrum of topics familiar to anyone who wonders about technological advances and the future. How will dating apps and social networks change the way we view place, our bodies and our identity? What will it be like to interact with robots? How will traditional rural cultures adapt to urban life? The point is not to give answers but to capture contemporary concerns, while establishing the Design Museum as the new home of design debate. Justin McGuirk, Chief Curator, states: “The museum presents itself as a laboratory of ideas, and a place for absorbing how the world is changing.”­­ 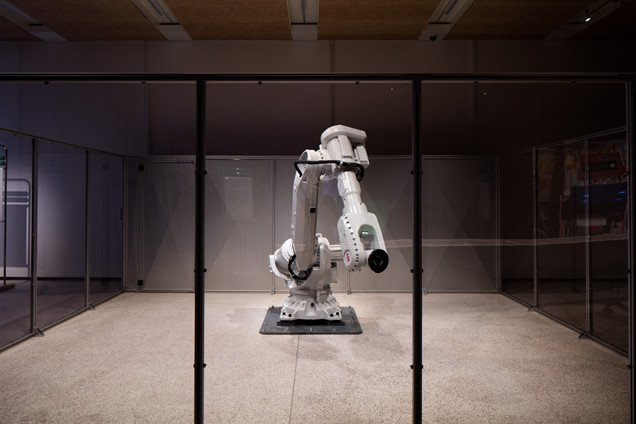 The idea that future prospects inspire both Fear and Love is perhaps best demonstrated in two exhibits that inform and comment on the other. One is a 1200kg industrial robot that has been transformed by Madeline Gannon into a mechanical creature named Mimus. Madeline programmed the robot to recognise people and movements, leaving within the code a certain freedom that allows it to explore. While being surveyed by this powerful machinery, it’s apparent that Asimov’s three laws of robotics may become more than a theoretical concern. Madeline sees robots as a potential companion species, not a competitive one.

The contrasting exhibit by graphic designers Metahaven presents an installation in support of anti-whaling wildlife organisation Sea Shepherd. It highlights how the human race seems to take for granted the animal intelligence we barely understand, while becoming fascinated by the prospect of artificial intelligence. Metahaven suggest the solution to the problem is more empathy: perhaps we need to act as a companion species to the other intelligences that surround us.

Recent UK events have a place in the exhibition. OMA, in response to the Brexit vote, present a domestic interior with a piece of design from each of the 28 member states, proposing that our notion of room design has been shaped by an ideal of European cooperation and trade. However, it would be refreshing to see more complexity brought to this issue to breach the polarisation engendered by such a divisive topic, addressing, for example, fear of the EU connected with the treatment of Greece, or the idea that a federation may itself turn inward, as America is now doing. 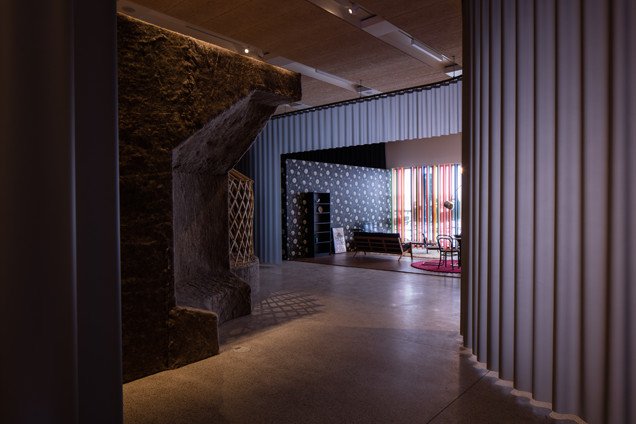 Other exhibits span the globe, with Hong Kong-based Rural Urban Framework exploring how nomads of Mongolia are settling in urban areas, investigating how the traditional ger (yurt) can be altered for a more communal life. Arquitectura Expandida, an activist architecture collective from Colombia, has created a replica of a school designed and built in one of the most disadvantaged communities of Bogota. Both show how a well-planned space can help alleviate difficult situations.

The notion of design now encompasses the digital. An intriguing exhibit is Intimate Strangers, an audio-visual installation presenting a series of tales about our pursuit of sex and love through social media and its potential to change the way we view the world around us. One video documents the way Grindr became a lifeline of communication among users fleeing war-torn Syria, demonstrating how the purpose of a designed item evolves in new situations.

Fear and Love is a worthy opener for this Museum’s reappearance at its new location. As McGuirk says: “When the Design Museum opened in 1989, the first exhibition, Commerce and Culture, was about the value of industrial products. Three decades later, we now take that value for granted. Fear and Love goes further, and proposes that design is implicated in wider issues that reflect the state of the world.” This exhibition fulfils its purpose to make the Museum stand out as a place where you go to put the present into context, as well as the past.