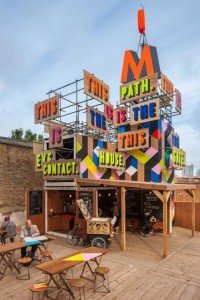 A little shout out to our favourite local pop-up cafe

In a little corner of a building site near Greenwich station, a beautiful café popped up just before the Olympics, and has been hosting music, film and poetry events all summer. Now that the Olympic and Paralympic crowds are gone, it remains a beautiful place to grab a coffee and a toastie in the morning (cheeky post-gym, pre-train brekkie) or to spend a nice evening (only £2 corkage if you take your own booze, so it’s not just for caffeine hounds).

We love the look of the MVMNT Café, and the idea of creating something so useful for the local community out of a bit of unneeded space. We’re not sure how long MVMNT will be around but we really hope it can cling on for a good while yet. Alas, pop-ups do end up popping down given time…

Check out the webpage, and the Facebook page. There’s live poetry on Wednesday evenings, and live music on Thursday evenings. 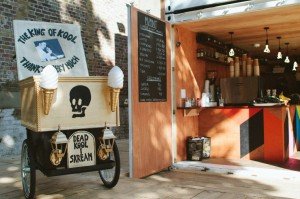 “The fastest temporary pop-up cafe in the south-east… It started as an empty corner of our site on Greenwich High Road and Waller Way, just yards from the entrance to Greenwich DLR. Then came some containers, some bright pots of paints and the vision of Morag Myerscough…

An amazing team lead by the Danny Elphick worked tirelessly on the construction of the cafe whilst Morag’s team went about creating a beautiful entrance to the Royal Borough of Greenwich, using the words from ‘Shipping Good’, a poem written for the MVMNT by official Olympic poet Lemn Sissay about Greenwich, on a colourful hoarding down the length of Waller Way. 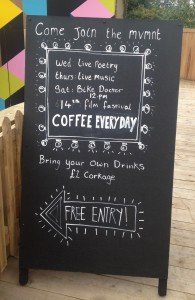 Then Claire Pritchard from the Greenwich Co-operative Development Agency brought along some helpers for the finishing touches and started to get the cafe in shape for visitors. They will be running the cafe for us, providing passers-by with locally sourced, delicious food and drink including homemade vegan-friendly gelato.

And then we opened. All in time for the first day of the London 2012 Olympics where thousands of people are due to pour off the train at Greenwich to enjoy the greatest show on earth. It’s a lovely, warm and welcoming space where we’ll also be hosting weekly poetry and music events in throughout the summer.”