Matt Smith to star in American Psycho at Almeida Theatre 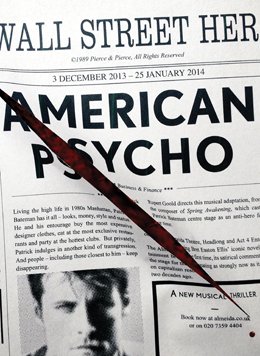 We were already excited about the upcoming American Psycho at the Almeida Theatre – and today, our excitement has reached new levels, as Matt Smith has been announced as Patrick Bateman!

They Say: “Wildly controversial on publication, American Psycho is now acknowledged as one of the great literary satires. In the narcissistic yuppie psychopath Patrick Bateman, writer Bret Easton Ellis created one of the most iconic anti-heroes of the 20th century.

Matt Smith is in his fourth and final year playing Doctor Who in the cult BBC TV show. His performance as the youngest ever ‘Doctor’ has won him international acclaim and a BAFTA nomination. His last appearances will be the 50th anniversary episode in late November and the 2013 Christmas special.”