We caught up with the London Varieties lethario Mat Ricardo ahead of his last show on Wednesday 24th July at Leicester Square. He told us about his London and a bit about the history of the institution that is London Varieties. 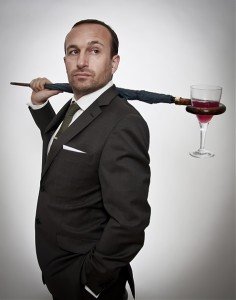 It’s a big, fun, no apologies variety show – this kind of show hasn’t been in the west end since the heyday of my heroes in the 70’s – so it’s completely unique. Circus, comedy, variety, music, magic and surprise guests all in one show!

Who are you most looking forward to seeing at the last show?

I’m lucky in that I get to book my favourite acts, so I’m truly looking forward to everyone on the bill – Rayguns Look Real Enough are batshit crazy, Edd Muir is an amazingly talented acrobat, Paul Zenon is an untrustworthy trickster of the highest order, and Dave Gorman has lived a life full of insane adventures, so I can’t wait to chat to him.

What have been your favourite London Varieties moments?

Last year there was a moment where I found myself leading a line of tap dancing showgirls. That’s about as good as it gets. This year, it was really special to be able to remind my audience what a brilliant live act Paul Daniels is, and at the same time thank him for his influence on me personally. 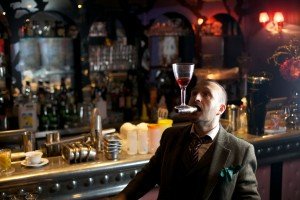 I’m a big fan of a good greasy spoon, so Diana’s Diner in Covent Garden would have to be on my list – that place kept me sane and fed in the years when I was a street performer. In terms of entertainment/going out – London’s got a bunch of beautiful and sometimes gorgeously shabby cabaret venues that are all worth checking out – the mighty sticky-floored palace that is the Bethnal Green Working Mens Club, Soho institution Madame Jojos, The hidden-away opulence of the Cafe De Paris. I feel lucky to be able to regularly work them all.

Well, the next month I’ll be premiering my new one man show “Showman” at the Edinburgh Fringe, so that’s one long offbeat event. You never know what you’re going to see there, but you’re pretty much guaranteed at least one thing you’ll fall in love with. 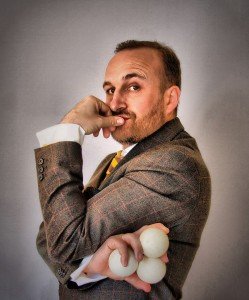 I’m a big walker. You can’t beat just wondering around London, people watching. That’s something I do when I’m stuck on an idea for a piece of work – just get myself walking around town and the ideas tend to get unblocked. Oh, and the bridges – since I was young I’ve always said hello to the river whenever I cross a bridge. Still do. Shut up.

From a street performers perspective, London audiences are some of the worst you’ll encounter. But the benefit of learning to work the street in London, is that when you travel and work to crowds in other countries, you’ll do OK because you had a good, hard training!

Last ever London Varieties, this Wednesday at 9.30 at the Leicester Square Theatre, and “Showman” at the Edinburgh Fringe!