Get LOST on Wandsworth Road

We like the look of what’s coming up soon at the LOST Theatre, and like the happy sharers we are, we thought we’d spread the word. Here are our highlights, coming up at LOST… 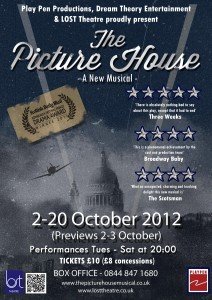 “Yorkshire, 1939. A young couple, Penny and Oscar, buy an old but equally charming picture house which quickly becomes a success. However war is just around the corner and it is not long before Oscar and the men of the town are called to serve for their country. Can the picture house, which has become the pride, joy and escape of the community, survive the horrors of war?”

A new production from Play Pen Productions, The Picture House features an original book and score, as well as a live band. If all that Diamond Jubilee and Olympics palava has left you with a yearning for even more British spirit, we reckon you’ll do a lot worse than a trip to The Picture House. 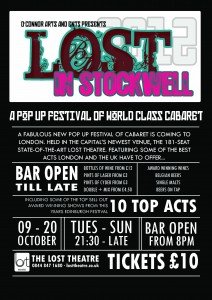 This promises to be a fab pop up festival of cabaret, featuring some amazing acts.

The Priory Arms is just a five-minute walk from the LOST Theatre, and plays host to a series of free nights during the week. So take your pick from comedy on Wednesdays, improv on Thursdays and cabaret on Fridays. Just bring some pocket-money to get a bit tiddly. All good fun. 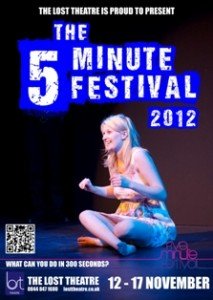 Back for its fifth year, The 5 Minute Festival welcomes 40 of the UK’s most talented, innovative companies, and lets them battle it out in front of a live audience, expert panel and online audience.

So if you love theatre but struggle to get through a one hour play without yearning for your iPhone, this one’s for you.