The Fleabag bites back. A rip-roaring account of some sort of a female living her sort of life. 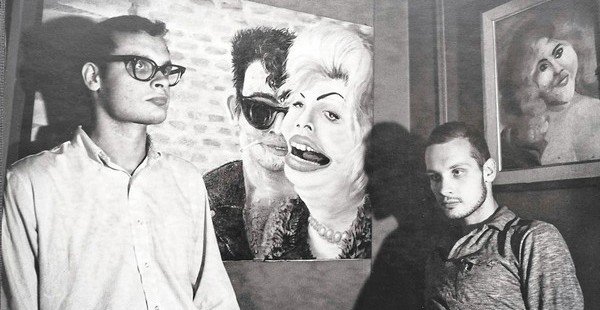 Born in The Bronx in 1942, twin brothers, Mike and George Kuchar started making 8mm micro-epics in their youth, creating a DIY cinematic style that celebrates the common man whilst oozing ‘kitchen sink’ Hollywood excess. Parting ways as co-directors in 1965, the brothers went on to hone their own unique styles. Little Joe have teamed up with Copenhagen-based writer Jack Stevenson to honour both brothers, presenting a selection of their works in 16mm, taken from Jack’s own personal collection.

Oxbow Lakes dramatises a child’s experience of his parents conflicted feelings towards him and themselves. It turns this emotional, psychological territory into an imaginative visual landscape inhabited by an array of characters – comic, grotesque, disturbing. Oxbow Lakes is part fairy-tale, part murder-mystery, part dark musical-comedy.

In the city of Vienna, Johann, a guard at the grand Kunsthistorisches Art Museum encounters Anne, a foreign visitor called to Austria because of the poor health of a friend. Never having been to Austria and with little money, she wanders the city in limbo, taking the museum as her refuge. Johann, initially wary, offers help, and they’re drawn into each other’s worlds. Their meetings spark an unexpected series of explorations – of their own lives and the life of the city, and of the way artworks can reflect and shape daily experience.

The Congress for Curious People will draw to a close with this two day symposium addressing the concept of spectacle. To download a short version of the programme as a PDF, please click here. For more information about each speaker, take a look at the participants page.

Make sure you Get on the River this Thames Festival!

Paddle a canoe under Tower Bridge, take in a high-octane speedboat trip, indulge in a film by David Kew at Hermitage Moorings, enjoy a gentle cruise in a traditional Thames barge or get behind the scenes at the UK’s busiest lifeboat station.

There’s something for everyone.

This is the fourth year of the festival. Every event free. No booking required, just head along. For full details, download the programme.

Over the years, us Brits have given plenty to our American cousins. David Beckham, Cary Grant…their freedom. Because of that history of generosity, we have no qualms about now taking from them and so it is with great pleasure that we announce that Meatopia – an annual food event in New York City – is now coming to Tobacco Dock, London.

The brainchild of TIME Magazine food columnist and James Beard award-winning food writer Josh Ozersky, Meatopia is an acclaimed food festival for discerning carnivores, brought to you in London for the very first time by Turner & George.

Live music performances will take place from 11am on Sunday 8 September in celebration of the East End: past, present and future.

• Hackney Globe Trotter – our resident DJ for the day. Russ Jones was behind some of the biggest club nights of the mid-90s.
• Beatbox Collective – this crew has played at Glastonbury and The Big Chill
• Trio Manouche – These three ‘gypsy swing’ kings get jazz joints and festivals jumping across the UK at venues like Ronnie Scott’s the 606 club and the Secret Garden Party festival
• Hackney Colliery Band – this local London band fuses together the sounds of New Orleans marching bands and hip-hop brass sounds

And not forgetting …
• Wara – A band that regularly packs London’s Jazz Café. The Guardian gives four stars to the band’s debut album.

Chrisp Street Market will be filled with cookery demos, art workshops and street food stalls with a pop-up Chrisp Street Cinema in the evening.