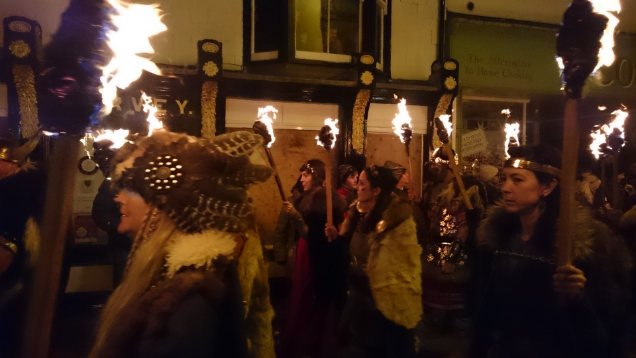 To Do List deemed 2016 the most promising year to try out Lewes Bonfire Night. With no rail connection thanks to the ongoing Southern Rail debacle, and the presence of armed police, conditions were perfect for an invigorating riot at the country’s most famous 5 November celebration.

Courtesy of a crowded shuttle bus service from Brighton, we pass many people walking to Lewes and, in typical Brightonian fashion, an eco-friendly bike train. We arrive near the Dorset pub, the headquarters of Cliffe Bonfire Society, just in time to see flaming barrels towed off at speed into the high street. Lewes has seven Bonfire Societies, each with a different base, procession and Bonfire site. With six marching on the 5, joined by about 40,000 spectators, this makes for impressive crowds in a town with a population of around 17,000. 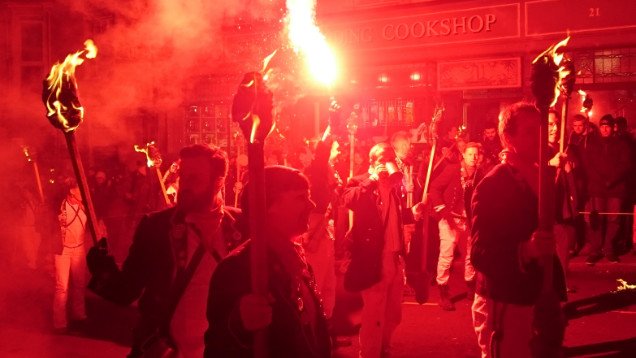 The Societies are dressed in various costumes ranging from Vikings to Suffragettes, carrying flaming torches and following different parade routes before joining up into one long procession at the end. It’s a bit like being transported into a science fiction film where several timelines have been blended together. Looking at all these faces lit by firelight, rather than the glow of computer screens, it’s easy to think that humans have probably been pretty much the same throughout history, in all our slightly unhinged glory. Perhaps this isn’t such a whimsical thought when considering the real revolutionary fervour fermenting in the world outside. 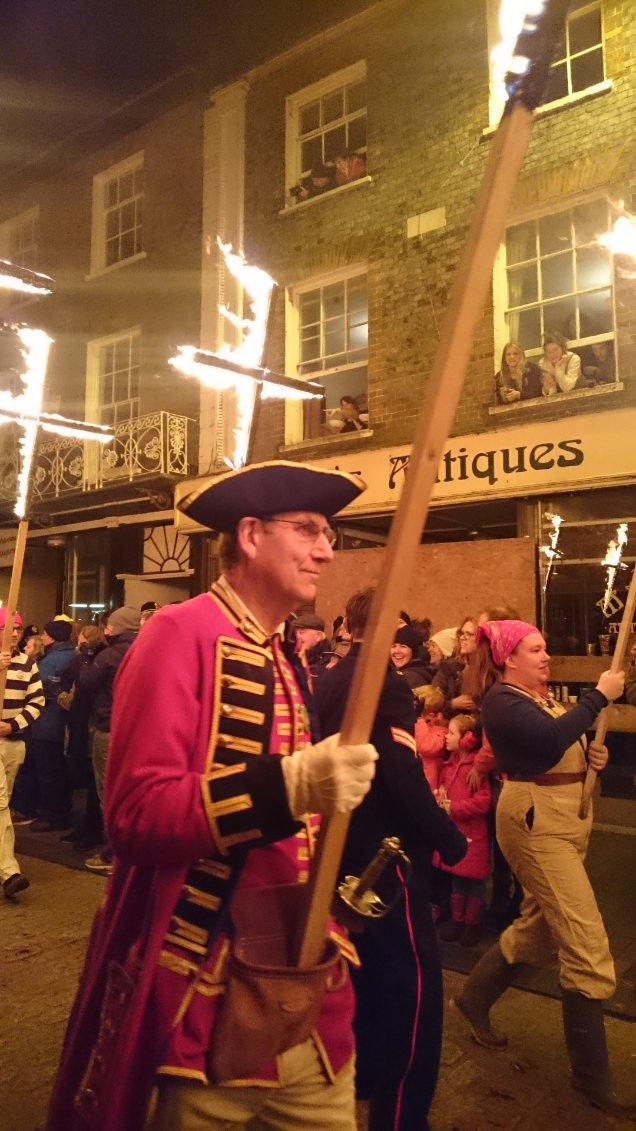 One woman behind us in the crowd chats away to a family member about the procession, saying: “Look out for your Auntie. Oh, there’s what’s-his-name whose dog died,” only to stop and suddenly scream, “Burn him! Burn him!” when a man dressed as the Pope walks past. But, before we get too alarmed, context is everything. Lewes Bonfire Night is largely held in remembrance of religious persecution against Protestants, rather than hatred against Catholics. The flaming crosses may be slightly disturbing at first, but they are held to commemorate 17 martyrs burnt at the stake in the 16th century. In any case, never fear, if you find yourself offended, Lewes will continue its traditions quite happily without you. After all, there’s a lot to get done, what with mourning religious persecution, commemorating fallen soldiers, expressing solidarity with Native Americans, burning effigies: it’s a busy night. 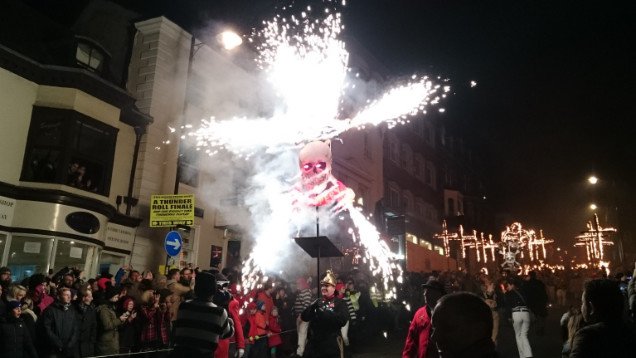 The effigies are impressive and, in some cases, surreal. One society, South Street, tows along Winnie-The-Pooh, Tigger and Piglet. A slightly nonplussed child asks his Grandmother: “They won’t burn Pooh, will they?”, to which she replies, “They can’t do, not South Street, surely!” Apparently this is a family-orientated society, who would normally leave the explosion of children’s bears to others (maybe it’s for the best the To Do List – Editor, Rupert, wasn’t there). Of course, 2016 also brought us an inevitable Donald Trump effigy. Well, four of them, to be precise. 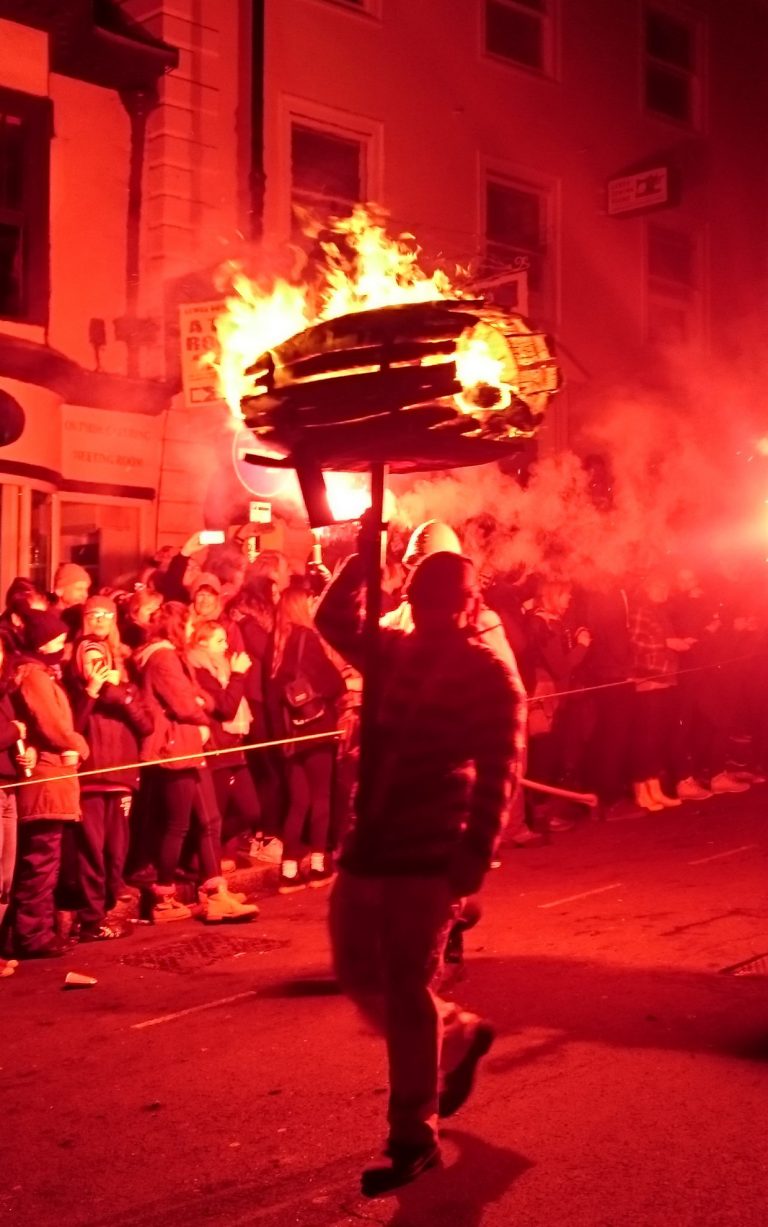 After it’s all over, we board the bus to take us back to the present, which, given the current polarised global political situation, looks somewhat reminiscent: many factions duking it out while confused people watch from the sidelines and wonder what the hell is going on. With events like Lewes Bonfire Night held throughout history to let people blow off steam, it’s interesting to experience a mock show of people power when the idea of real change is bubbling close to the surface. The next morning, we were still slightly deaf from all the bangers, smelling of paraffin, coughing like we’d smoked 100 cigarettes, and looking forward to doing it all again next year. Hopefully not for real. 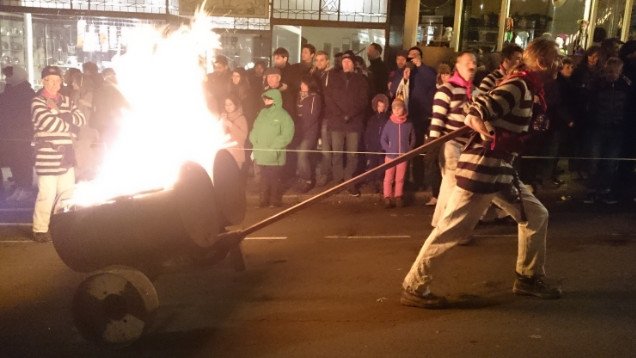