Read below to find out what keeps Joe entertained in and around London, and make sure to catch him at Happy Mondays on Monday 12th (along with friend of To Do List Katherine Ryan, and Robin Ince). 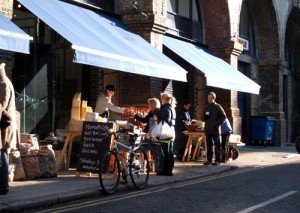 Hey Joe, tell us about your favourite secret/offbeat places in London?

I have recently fallen deeply in love with Maltby Street in Bermondsey on a Saturday. It’s a food market, not dissimilar to Borough but smaller and less busy and they do the most incredible variety of beautiful cooked food. It’s such a creative experience and it’s a real treat for me at the end of the week.

It sounds terribly cliché and that’s because it is, but I love getting lost in London. I’m from Birmingham originally and if you get lost there you probably just get stabbed, whereas in London you can find some delightful little things and some incredible architecture. I don’t wander the streets of London as much as I’d like these days but when I do it’s always worthwhile.

I don’t really like North London. I find it quite bland and safe and unexciting at times. South London is where it’s at.

Come to my show at the Soho Theatre from 6-9th February 2013. It’s my Edinburgh 2012 show ‘Some Lycett Hot’ and it was nominated for Best Newcomer at Edinburgh Comedy Awards and is good fun and I think you might like it.