We caught up with the supremely talented Peter Groom to talk about his upcoming show Dietrich: Natural Duty, celebrating the legendary Marlene Dietrich at the gorgeous Wilton’s Music Hall.

Tell us about your show Dietrich: Natural Duty, coming up at Wilton’s Music Hall – what should an audience expect?

‘Dietrich: Natural Duty’ is all about icon Marlene Dietrich’s incredible commitment to duty. We focus particularly on the war years, exploring how she put her Hollywood persona to good use, marching with and entertaining allied soldiers on the front lines to help fight the fascism that was gripping her homeland.

It’s glamorous, it’s sexy, and her story is incredible poignant. If you know her and her work, come! If you don’t, come!

What or who inspires you to play such a legend?

I guess Marlene herself. I find her incredibly inspiring and now more than ever I think her story is particularly relevant. There are many parallels with the time back then and now; the idea of a country changing is just one.

For example Brexit: what do you do when your country no longer agrees with what you think? There’s also a queer aspect to it – Marlene is a queer icon, and as queer people, what do we do when the place we’re from doesn’t agree with who we are? What do we do politically to help, make a difference, to take a stand for what we believe is right ?

What would be your advice to performers trying to create a character like Marlene?

I’d say read, watch and find everything and anything you can. Take in all the information you can about them and then forget it all and trust your instinct.

I think it’s the personal connection to a character like this that makes them interesting to watch, the thing that fascinates you about that particular person. For me, it’s Marlene’s contradictions that make her so complex and interesting. She’s full of dualities: her androgynous attraction, her Prussian sense of discipline that she uses to fight her homeland, and her incredible glamour which she jokes at and shrugs off.

You look incredible as Marlene – talk us through the steps of the transformation? Is it worth it?

Thank you! I spent a lot of time in the months leading up to the show refining her make up and costume. She is immaculate and that can be a lot to live up to! First it’s make up, then the wig then the incredible dress created and made by costume designer Kathleen Nellis. The whole process takes around two hours.

I think it is worth it, because she worked so hard in her life to achieve the perfection of the Dietrich image, I want to honour that. It’s a key part of her character to understand also, her iron discipline which allowed her to keep the quality of her image to such a high standard throughout her life.

The Glory is a favourite, you’re bound to have a great night there!

There’s also a great artist called Emily Howard who hosts a night called ‘Up Yer Weimar’, I’ve performed at the night before and haven’t missed one since, each one has a different theme and people really go all out on the costumes which is amazing. Great people, great night! 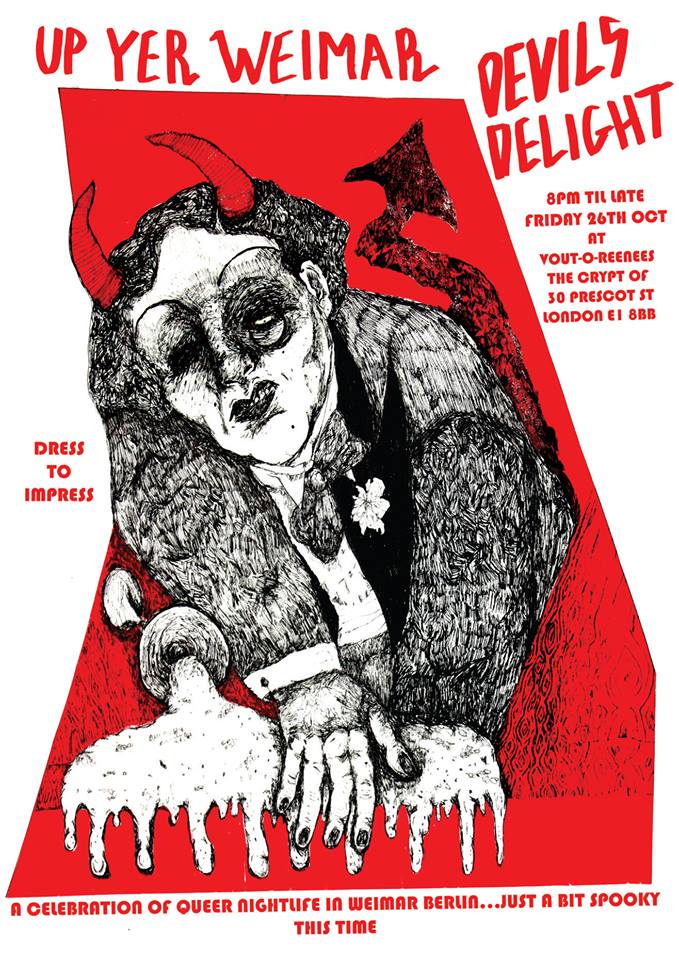 A poster by Emily Howard for the night UP YER WEIMAR