Interview: Marie Klimis from 27 Degrees ahead of their immersive show Medusa

We caught up with maverick theatre maker and member of 27 Degrees, Marie Klimis to talk about their hot new show Medusa coming up in September 2018.

Tell us about Medusa. What should an audience expect?

Medusa is an immersive theatre piece taking over the dramatic vaults of the Crypt Gallery. The show starts with the myth – what most people know about the snake-haired gorgon and what most people ignore – and then explores its significance in light of contemporary women. Audience members are invited to follow six contemporary Medusas – a homeless girl whose gaze people are afraid to meet, a schizophrenic woman who has been locked away in a labyrinth of her own making, a woman shamed for her sexuality – and they can decide which stories they want to hear. The show combines theatre, dance, music, puppetry and installation and explores what it takes to be a monster in the 21st century.

How do you see the character of Medusa and her relevance to today?

When you ask people what they know about Medusa, many only remember that she was a monster that was killed by Perseus in a labyrinth. But in Ovide’s original text, Medusa was one of Athena’s priestesses: she was raped by Poseidon, then punished by the goddess for having ‘soiled’ her temple: she transformed her into a monster, condemned her to live underground and then sent Perseus to get rid of her. The fact that the earlier part of the myth is completely ignored says a lot about the society we live in: all around the world, women are still easily labelled as monsters, when they adopt a lifestyle that differ from society’s standards.

Who or what inspires you to make your shows?

We are a multicultural collective – I am from Belgium, my two partners in crime are from Peru and Croatia, and we work with artists from all around the world (for Medusa we collaborated with practitioners from Denmark, Korea, China, Mexico and the UK). As a result, we are interested in international stories that resonate with the contemporary world. In this show, we chose characters, music and materials coming from all corners of the globe. And international narratives will also be at the heart of the new show we are working on, Touching Home, which will be a sensory theatre piece about London migrants. 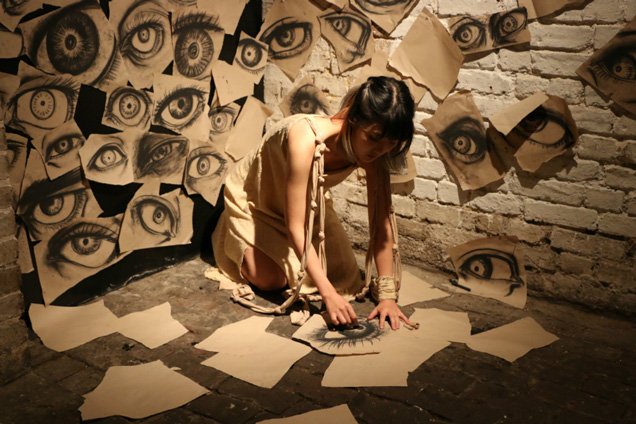 What advice would you give those thinking of making something in an unusual site like a crypt?

Don’t expect the site to be a theatre venue: sometimes, artists used to perform in theatres are upset because they can’t have a proper dressing room, clean sprung floor or theatre lighting. But the Crypt has so much more to offer, things that the most ambitious stage designer could not conceive. We define ourselves as a site-sensitive collective and we love to adapt our shows to the venues we perform in: and with the Crypt Gallery we have been spoiled! The venue has a grand mythological entrance, ancient tombstones, intimate alcoves, maze-like passageways and it is exciting to invite audience members to follow characters in such a dramatic environment. The elements of set design we bring with us intend to complement the venue, not compete with it.

What are your favourite London haunts? (to eat/to be entertained/to relax)

I like quirky places, places where they are secrets to be discovered, stories lying underneath the obvious. For example, I am a big fan of the Alternative London Tours in Shoreditch, tours organised by street artists and exploring Tower Hamlets complex migration history while showing hidden street art gems. Battersea Arts Centre is probably my favourite London venue, combining exciting multidisciplinary programming (including a lot of immersive theatre), a fascinating political history (the building used to be a Town Hall) and a strong community vibe (plus they have their own cat, inherited from Punchdrunk’s Mask of the Red Death). I also used to live next to The Mayflower, a candlelit 17th century pub that feels a bit like time travelling (and it is next to the Thames Tunnel, another fascinating place where we performed Medusa last year).

Get more information about Medusa and tickets here