Tell us a bit about yourself? How did you become a promoter and DJ?

My first real break was in 2008 doing guest DJ’ing stints at Cockabilly – London’s only monthly queer rockabilly night, sadly now defunct. The highpoint of that was probably the time we were doing a residency at the old George & Dragon in Shoreditch and Beth Ditto came in and danced to Ike and Tina Turner! In 2009 I became the regular resident DJ at the monthly burlesque “life drawing” cabaret night Dr Sketchy, playing bump-and-grind “tittyshaker” instrumentals for the striptease artists. I did that for several years and by 2012 it felt like a natural progression to venture into organising my own regular club night. Lobotomy Room is a low-brow mixed / queer Mondo Trasho punkabilly booze party.

I play mostly rockabilly, punk, surf music and rhythm and blues. I call it “vintage sleaze” – it’s all stuff inspired by John Waters soundtracks and The Cramps. For the first few years of Lobotomy Room bounced around between various East London venues, and then in 2015 it found a permanent home in the basement Bamboo Lounge of Fontaine’s cocktail bar in Dalston. The ground-level bar is 1930s-style Art Deco, and the Bamboo Lounge downstairs is a Tiki paradise. One major bonus is that there’s also a film projector down there, which means I can project “vintage erotica” (think Bettie Page cavorting in lingerie or baby-oiled beefcake bodybuilders wrestling) on the big screen for extra ambiance while I DJ! Fontaine’s proprietor Ruby was already doing a film night downstairs. By November 2015 I squirmed my way into that and started doing my own regular monthly Lobotomy Room film club, specializing in the cult, the camp and the queer. The motto is “Bad Movies for Bad People”.

Tell us about your upcoming nights?

The dance party is always last Friday of the month and the film club is third Wednesday of the month. On 19 September 2018 Lobotomy Room presents a tribute to the late, great heroin-ravaged Warhol Superstar and Velvet Underground chanteuse Nico with a screening of the 1995 documentary Nico Icon. The Lobotomy Room dance party returns on 28 September. Headbang away your end-of-summer blues! Start autumn 2018 on a note of sweaty desperation at Lobotomy Room! Admission for both events is always free, by the way. 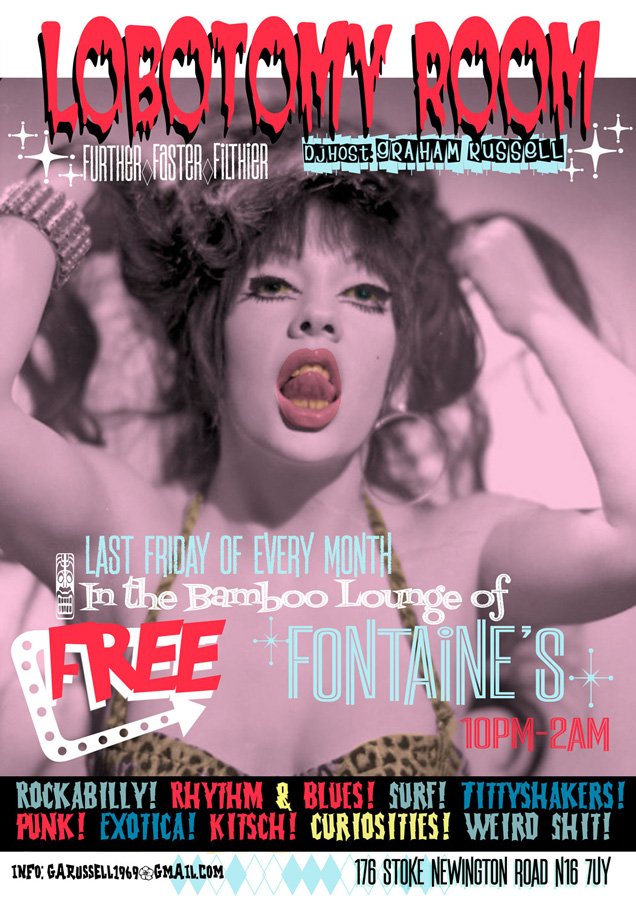 Who or what inspires you to make your nights?

London has become so sanitised and corporate over the years. In my own small way, I’m trying to return a bit of raunch, freakiness and “adult situations” to nightlife! The tagline for the club is “revel in sleaze, voodoo and rock’n’roll.” When people arrive, I want them to feel like they’ve stepped into their own 1950s b-movie. For the dance party, I’m motivated to make it aggressively trashy, rancid and confrontational. I think even people who don’t think they like punk or rockabilly are hungrier for aggressive music than they realize! The film club only accommodates thirty people, so it’s “intimate”. I’m definitely trying to recapture the communal “midnight movie” grindhouses experience of watching a film with a rowdy, drunk audience. If I’m screening something like Ed Wood Jr’s Glen or Glenda or Mae West’s gruesome last film Sextette, they definitely improve after a few stiff cocktails. With the film selections I’m also trying to revive the concept of old-school gay diva worship, so we show films starring golden age Hollywood figures like Jayne Mansfield, Ann-Margret and Marlene Dietrich. When Feud: Bette & Joan was on TV, we jumped on it and showed Joan Crawford as an axe murderess in Strait-Jacket to a rabid full house!

What are your top 3 kitsch/cult/queer movies and why?

Female Trouble (John Waters’ defining masterpiece) and perennial drag queen favourite Valley of the Dolls (the original campy Bad Movie We Love) are both life-changing films. Once seen, you will be quoting dialogue from these two for the rest of your life. The patron saint of Lobotomy Room is Jayne Mansfield. The 1968 film The Wild, Wild World of Jayne Mansfield isn’t a cult film, but I’m on a one-man mission to make it one. We specially scheduled it last year to commemorate the fiftieth anniversary of Mansfield’s death. In this berserk faux documentary, Jayne traipses around the world’s international sin spots (topless nightclubs, nudist beaches, gay bars, drag balls) in a ratty wig, accompanied by her miniature chihuahua. It’s life-affirming! 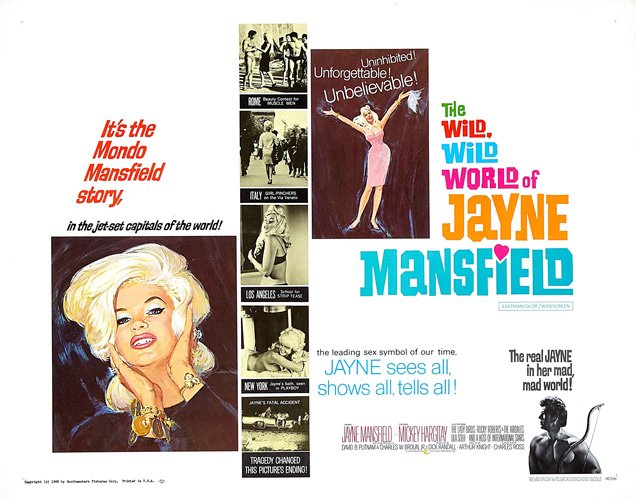 What are your favourite London haunts? (to eat/to be entertained/to relax)

I live in East London so it all pretty much revolves around the East end. As well as Fontaine’s, I usually wind up at Dalston Superstore and The Glory once or twice a month – especially if drag terrorist Baby Lame is performing. Lobotomy Room kindred spirts Dominion of Scum does a regular monthly cinema night at The Glory devoted to 70s and 80s exploitation movies. You can usually find me at that! 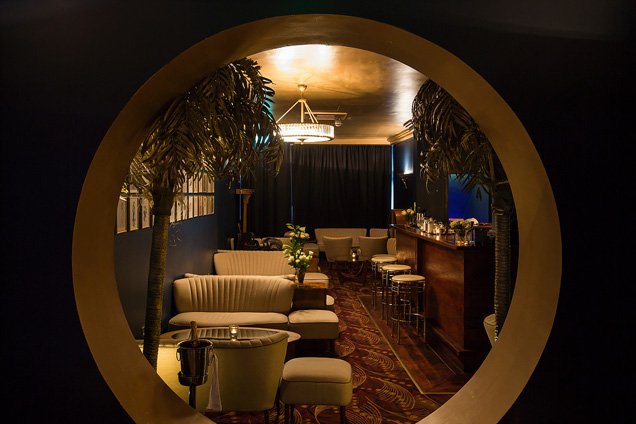 ← Interview: Marie Klimis from 27 Degrees ahead of their immersive show Medusa
Interview: Shunt co-founder Gemma Brockis on her show ‘An Execution (by invitation only)’ →