WIN! Inside No 9 DVD + DVD signing at HMV Oxford Street

An anthology of tales of the genuinely unexpected, Inside No. 9 invites viewers into six very different No. 9s, where the ordinary and mundane rub shoulders with the extraordinary and macabre. The DVD is released on 17th March 2014. 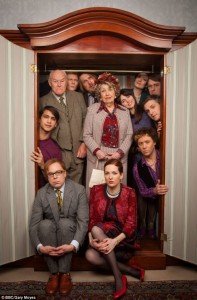 From a grand country house where an innocent game of Sardines leads to some chilling revelations, to a blood-soaked actor’s dressing room in London’s West End, or the one-bedroom flat of an apparently happy primary school teacher – these unpredictable tales feature high comedy, unexpected twists, and claustrophobic horror by turns.

On Thursday 20th March, head along to HMV to meet Steve Pemberton and Reece Shearsmith in person, and get a copy of your Inside No. 9 DVD signed!

We’ve got three copies of the Inside No. 9 DVD to give away!

The competition is now closed!

Competition T&Cs: By entering this competition, you are joining the To Do List mailing list, from which you can unsubscribe at any time. Entries received after 5pm on Friday 14th March will not be considered. The three winners will be chosen at random, and will be contacted by email and by text by Sunday 16th March. If we are unable to contact a winner, a new draw will take place.