From an exploration of what it is and was to be a child, through to age-appropriate adventures around Battersea, and Zombie Killer master-classes, here are seven theatre-y events this October (and beyond) which promise to put you right at the heart of the action. 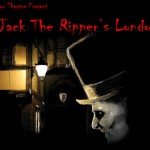 “Jack the Ripper’s London is a promenade, interactive recreation of a Whitechapel street, above and beyond conventional theatre. You will follow the story of the last victim, Mary Kelly, and her turbulent relationship with her boyfriend. From market place to music hall, pub to pavement, meet the vigilantes and police, share a drink with the colourful characters of the East End and maybe…just maybe…follow the footsteps of the illusive and infamous Jack the Ripper.” 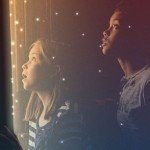 “At Battersea’s old Town Hall, an adventure for all ages is waiting to burst out, take over the building and spill onto the streets. You might choose to explore the secret passages of Battersea’s former Town Hall in search of a lost memory or take a trip outside with the strangest brass band you’ve ever heard.” 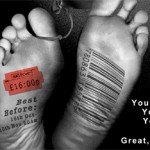 “HalfCut tackle the meaninglessness of life. You share a life with your avatar in this immersive and interactive promenade performance; you’re born together, you grow and eventually deflate together. There are many ways to go through life but there is only one ending, and that’s the same for everyone.” 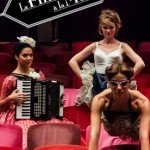 “A mysterious accordionist leads the audience on an unexpected trail where performances pop up seemingly out of nowhere. Performed by a cast of eight female dancers, actresses and musicians La Fille à la Mode is a sensuous, decadent and provocative theatrical experience that explores the continued celebration, and exploitation, of glamorous ‘It’ Girls throughout the ages.” 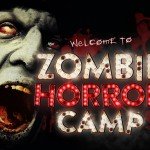 “Delve deep into London’s oldest morgue, home to a population of Zombies. Visit their grotesque strip club or exact revenge on your arch enemy at the Voodoo Doll making workshop. Take part in a Zombie Killer master class before you dare the Zombie Killer Run Challenge, or if you just fancy a good old drink and dance, sip a blood cocktail and dance the night away at the Zombie Disco. Thriller style.” 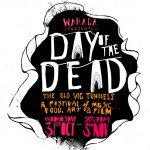 “Wahaca is bringing Mexico’s vibrant Day of the Dead celebrations to London, for a four-day festival of music, food, art and film hosted at The Old Vic Tunnels. Performing each night, on the first leg of their European tour will be this year’s Wilderness Festival headliners, Rodrigo y Gabriela with their unique instrumental blend of metal, jazz and world music.

£51 ticket includes Wahaca food, a visual arts show, access to the headline music concert by Rodrigo y Gabriela, screening of Santa Sangre with performance of a new live score by the Cabinet of Living Cinema, and more music, performance and late night revelry with Communion DJs.

£5 Saturday daytime entrance (2pm – 6pm) offers an opportunity to view the exciting visual artists on show and enjoy screenings of the Alejandro Jodorowsky classic film Santa Sangre with a newly commissioned live score by The Cabinet of Living Cinema to accompany the film screening.”

Great stuff you may have missed: 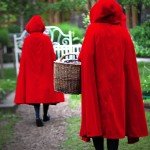 “This classic dystopian tale is given flight from the page, re-imagined in this unique new production for the stage. Following their sellout

performances at the Dalston Eastern Curve Garden, Featherweight bring the show indoors for the first time in this exciting new venue.”

“Childsplay explores the ways children have played outdoors from the 1950s to today. Childsplay is for adults, about childhood, and asks – have children’s games and imaginations really changed? The show surrounds the audience with fictional characters whilst treating them to the recorded memories of real people from around the UK.”