A sensory overload of daring and demanding storytelling – daring to lay it all on the line, demanding to be heard.

Bryony Kimmings, of course, has form with this kind of work – she doesn’t do autobiographical performance art by halves. Previous pieces – ‘7 Day Drunk’ (alcoholism), ‘Fake It ‘Til You Make It’ (depression), ‘A Pacifist’s Guide to the War on Cancer’, to name but three – have tackled big issues head-on, with Kimmings never shying away from revealing her own insecurities and weaknesses. Indeed, it is the very exposure of these vulnerabilities, live on stage night after night, which has – to some extent – become Kimming’s calling card.[/vc_column_text][vc_column_text][/vc_column_text][vc_column_text]’I’m a Phoenix, Bitch’ breaks from Kimmings’ recent shows, though, in that here she is all alone on stage, very much emphasising the (often necessarily) solo experience of coming to terms with trauma. In this case Kimmings relates how, following the tour of ‘Fake It ‘Til You Make It’ in 2015, arrival in an idyllic new home coincided with pregnancy; and then, amidst periods of intense anxiety and a a relationship under strain, the unimaginable horrors of looking after an extremely ill child.

This is pretty harrowing subject matter, and it is testament to Kimmings’ abilities as a storyteller that she can ease the audience in to what becomes a dark and – at times – terrifying journey through a tormented mind, and then bring them out, Phoenix-like, at the other end.

The BAC’s restored Grand Hall is, of course, the perfect setting for this tale of overcoming extreme adversity. The staging itself, here, is simple yet effective, with a series of tableau-like mini-sets revealed one-by-one from beneath dust sheets. The darkest, most powerful sequence plays out in front of (or rather, behind) a spectacularly effective animated projection (courtesy of Will Duke) – the screen for which also hides a ‘surprise’ set which takes centre stage for the cathartic climax. 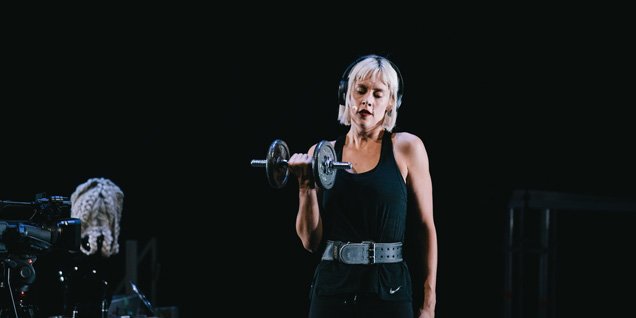 The narrative arc is, perhaps, a little predictable, though the path from beginning to end no less impactful for it. And the shifting tone – whilst cleverly invoking and pastiching horror movie tropes, gothic fairytales and biblical allegory – perhaps hints a little too much towards a writer who very much enjoyed Darren Aronofsky’s ‘Mother!’ (a film I very much ‘liked I should say).

But these are minor quibbles. ‘I’m A Phoenix, Bitch’ is powerful and provocative, yet never feels anything less than intensely personal – to the performer, obviously, but to each audience member, born to mothers forever shaped and altered by the experience of bringing fragile life into an increasingly intemperate world. Reasons to be anxious? Not half.[/vc_column_text][/vc_column][/vc_row]