The i360 opens tomorrow Thursday 4 August and our intrepid reporter Lucy Nordberg was at the scene to give us an inside view of the controversial new attraction.

This preview ride didn’t quite give the full experience of the i360, or to give it the full name, the British Airways i360 (the branding is strong in this ‘un). There’s no in-flight bar as yet, and we don’t exit through the obligatory gift shop, still under construction. But we did experience the main attraction, a trip to the top of the world’s tallest moving observation tower, freshly constructed on Brighton seafront. 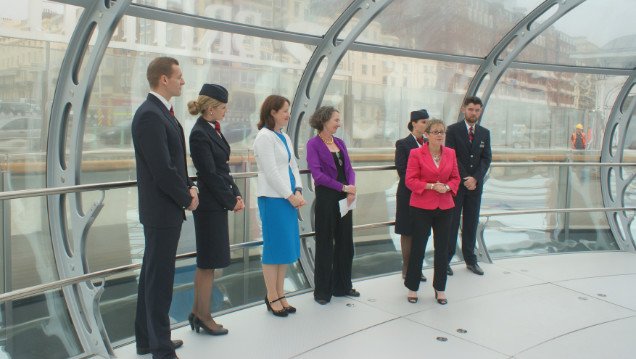 We’re told in the opening speeches that the architects, David Marks and Julie Barfield, wanted to replicate the London Eye in other cities, but the Eye comes with a huge construction cost. So they had a flash of inspiration – one large spacious pod holding up to 200 people could be just as exciting as a wheel. This somewhat glosses over the recent history of Brighton’s perfectly serviceable wheel, which was taken down so as not to compete with the i360. This late lamented attraction had a commentary from Steve Coogan about the view, complete with sardonic asides. On this particular trip, there are screens telling us a great deal about British Airways: I trust, when the i360 is fully open, they’ll tell us more about the city we’re looking down on.

The pod is pleasingly futuristic. Viewed from the outside, the base is shiny silver. The pole itself looks a lot like a thinner version of Shoreham Power Station chimney, just along the coast, but is impressively tall. It is a very different structure to the former West Pier, whose remains we contemplate directly below the pod. Controversy about bold new structures is usually pitched in the media as a fight between progressive, driven revolutionaries dragging us kicking and screaming into the 21st century, and old – or, it seems, increasingly young – tweedy bearded heritage preservationists. Of course there’s a case for clashing with tradition: just up the road, Sheikh Abid Gulzar, the new owner of Eastbourne Pier, has got into trouble for painting parts of it gold (he has a gold car, gold ring on every finger: as Shirley Bassey might have sung about David Dickinson, he loves only gold). But Gulzar’s genuine love for the Pier has done more to restore it and keep it running than, I suspect, the purists lined up on the news asking for it to be painted white again. However, there are certain aspects of the i360 it’s hard to overlook: the cost of an attraction like this, at £15 per adult, as opposed to a ‘free’ Pier, for example. The West Pier Trust own the land, and they hope commercial investment will be attracted by the i360, making a new pier possible. This is a gamble.

All that aside, the experience is fun: travelling high above a city is always a good bet for an attraction. Although the weather forecast for the trip wasn’t promising – mist and fog – we could still see enough of Brighton to make it interesting. On a clear day, it would be possible to look beyond the city, over the South Downs. The ride is smooth, and the presence of the smartly-dressed British Airways crew does give the feel of a flight with a destination.

It remains to be seen if the i360 can rise above the controversy (pardon the pun) and bring much-needed revenue to regenerate this part of the seafront. So for out-of-town visitors, it’s intriguing food for thought, and worth a ride – or at least a look. Just walk straight down to the coast from the train station, and look to your right: it’s the big 380 metre pole on the seafront, you can’t miss it. 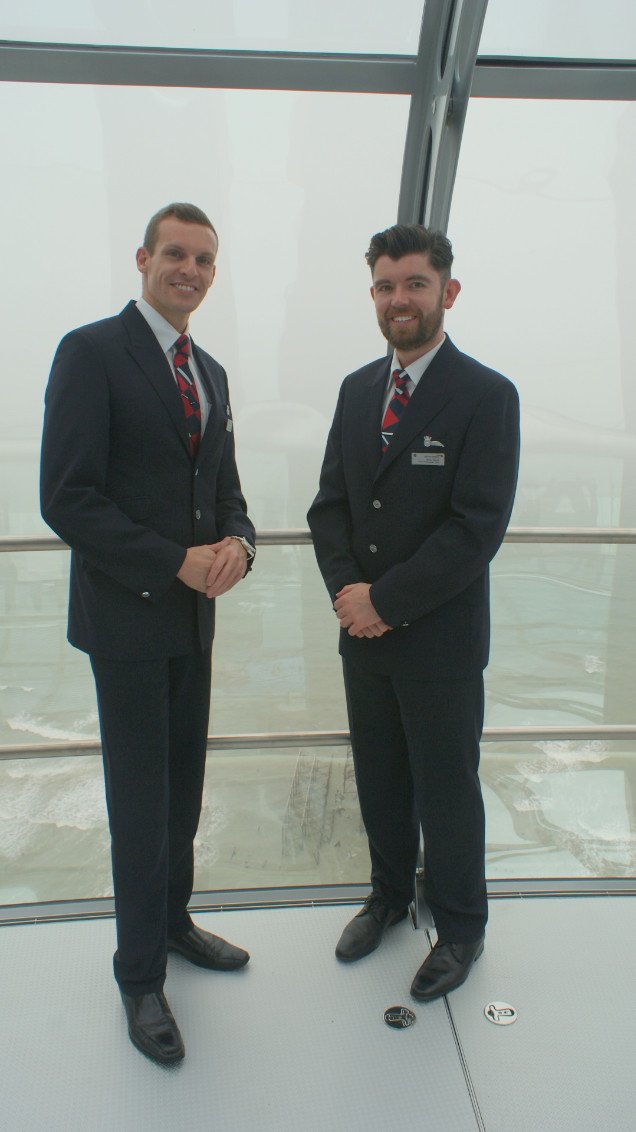 Lovely Flight Attendants on i360

Photos all by Lucy Nordberg

What do you think of the i360? Eyesore or want more? Leave a comment below with your thoughts.