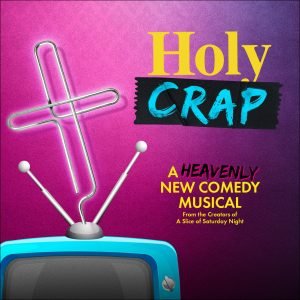 Tell us about Holy Crap? What should an audience expect?

I think the audience should expect the unexpected for this show. It’s very much like Rocky Horror 3 – two worlds that collide and form a hilarious and off-the-wall musical. In this show, it’s the world of evangelical religion meeting the world of pornography. A religious pay-per-view TV station, G.O.D TV, tries to boost audience numbers by showing pornographic bible stories – and when the money starts rolling in, they see how far they can push it! It’s got great rock songs, a hysterical script, and some amazing performances from a cast of West End names. It’s sacrilegious, but in the very best taste.

I love that description! I hate theatre that is safe – there is absolutely a place for classic musicals and crowd-pleasers in theatre, but it just doesn’t do anything for me. I love work that is anarchic, playful, and allows the audience to join in with the game. Black comedy certainly appeals to me – a very tongue-in-cheek style fits my sense of humour very well – and anything which allows the team I am working with to go crazy and have fun will certainly pique my interest. 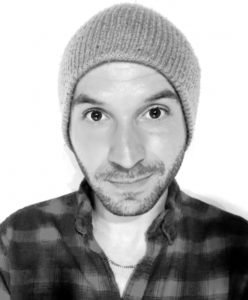 I definitely think there has to be a deeper message in a piece; I think comedy allows you to make a point to the audience without labouring it, and I love the idea an audience can go home after a show, be staring in the fridge, and suddenly go “shit, that show was totally making a point about the state of the world!”…or realise they’re out of hummus. Either/or, really.

Who or what inspires you to make your shows?

My Aunty Sian and Uncle Geoff are my main inspirations – they used to be in Birmingham Amateur Operatic Society when I was growing up and they took me backstage when they were doing Pirates of Penzance when I was about six. Everyone was having so much fun, joking, laughing, and I was totally captivated. I’ve tried to instil that in all my companies so far – if everyone is having fun, that is absolutely communicated through the performance on stage.

Other than that, I love Russian theatre – I adore the sense of playfulness that pervades the majority of Russian work. I’m a huge fan of people like Charlie Brooker, Frankie Boyle, Mark Gatiss and the League of Gentlemen, and musically I am thoroughly inspired by (and still greatly miss) the legendary Victoria Wood.

What advice would you give to up-and-coming theatre makers?

Persistence and self-belief is the key. It’s so easy in the industry to be swayed by “expected” behaviour, but if you totally believe in what you are doing and have confidence in it, that matters so much more. Pulling your finger out, speaking with excitement and fervour, and genuinely showing enthusiasm for a show is so important in an industry where getting even a whisker in the door is so difficult. Also, being nice to everyone is worth its weight in gold. There is absolutely no excuse for rude behaviour, and it is something you see time and time again with people trying to pretend they are bigger than they are – humility is so underrated (he writes pretentiously…) 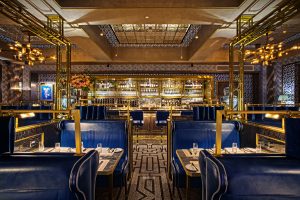 So I’m a huge fan of Bob Bob Ricard when I’m looking to impress – there’s a button by the table you can press where they wordlessly bring you champagne, champagne I tell you. I think Mexican street food is always a great meal to network over – it gives you a lot to talk about – so La Bodega Negra in Soho is really great for that. I love London’s parks for relaxation, but I think hanging out around the dinosaurs in Crystal Palace Park is pretty nice – there’s a great lake there, and it’s a gorgeous park throughout the year. I’m always up for an entertaining night at Brasserie Zedel – I love cabaret so there’s always something to see – but I’m a big fan of the The Vaults down under Waterloo, especially when the festival is going on. And for partying, I’m definitely a Freedom Bar fan in Soho – although getting through the bar to go for a dance downstairs without being distracted by a cocktail or two is the hard part![/vc_column_text][/vc_column][/vc_row]