He Had Hairy Hands // Kill The Beast Interview

He Had Hairy Hands is delightfully silly werewolf mystery, with plenty of belly-laughs!

We caught up with those crazy Kill The Beast peeps, and grilled them mercilessly…

We saw He Has Hairy Hands in Edinburgh this year, and loved it – how was Edinburgh for you?

This year we lived directly above a delicious pie shop, so we were pretty much set from the word go. As ever, Edinburgh was a glorious, messy, tiring, inspiring nonsense; full of excellent people and too much cider. Highlights included seeing some absolutely brilliant comedy: Lazy Susan, Adam Riches, Sheeps, The Beta Males, Massive Dad, Kraken, Cardinal Burns, Tim Key – and low-lights included having to buy an emergency greenhouse. That damn greenhouse.

Describe, somehow, the weird and wonderful world that you’ll be creating on stage at the New Diorama Theatre…

Well, the year is 1974, the place is a crusty British village, and there’s drippy murder afoot. Our shows tend to look surreal, cartoonish, murky and matted, with a healthy dollop of facepaint thrown in for good measure.

It’s a comedy first and foremost, but because we have these very distinctive visuals – projections, costumes, literally a billion props – we try to immerse our audiences in our very own quite horrid universe. Bring your laughing stomachs, bring your watching eyes, and we’ll thrown stuff at you.

We were all raised on a diet of British comedy, so The League of Gentlemen, The Fast Show, Vic and Bob, Harry Enfield – all of those shows that mixed the surreal light and dark so masterfully. For this show specifically, we also loved the melodrama of 70s B-movies and Hammer Horror: Blood On Satan’s Claw, Twin Peaks, An American Werewolf In London, not to mention the classic buddy-cop relationship from classic Starskey and Hutch type detective shows. They’re all just so wonderfully silly. Silliness and blood, that’s our main criteria. 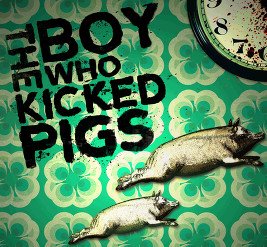 What’s next for Kill The Beast?

After our two-week run of He Had Hairy Hands at the New Diorama (which there might even be tickets left for, ahem), we’re jetting (driving) off on tour AROUND THE WORLD (the UK) with our first show The Boy Who Kicked Pigs. It’s actually a lot more blood-thirsty a show than He Had Hairy Hands, and we’re looking forward to wrestling with its juicy horrors again. After that, hopefully we’ll be starting something brand new. We’re all a bit bored of werewolves now. We need to spot another monster on the horizon.

We love the Prince Charles Cinema in Leicester Square, they put on AMAZING programmes and one-off events, and it feels like everyone there has a bloody lovely nerdy fascination with film. And we make most of our important decisions in front of eggs at The Blue Legume in Islington. Thing is, we’re a bit scattered about as a company (three out of five of us now live oop North), so we can mostly be found on trains. Does ‘trains’ count as a favourite place?

We thoroughly recommend the Hunterian Museum, an entire GALLERY full of dreadful body parts; weird and terrible biological wonders from around the globe. Having a lovely big sit at the Southbank or on Highbury fields also cannot be under-estimated. Any quiet bit of London you can squeeze some delicious booze and a bit of cheese in, really.

We’re very much looking forward to this year’s BFI London Film Festival, as well as seeing the ridiculous and dark musical Urinetown. Hopefully we’ll be putting on a brilliant and horrid Christmas Party for your delight and delectation, as well as seeing our theatre and comedy chums do more excellent stuff. And we might do a bit of that Yoga where everyone’s hot and unhappy the whole time.[/vc_column_text][/vc_column][/vc_row]