The stunning centrepiece to this year’s Greenwich+Docklands International Festival, The Four Fridas is an outdoor theatre spectacular, celebrating the life and work of the legendary Mexican artist Frida Kahlo… 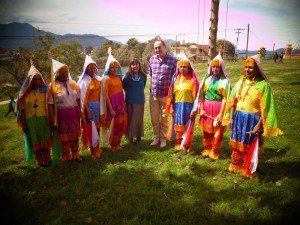 Bringing together some of Britain’s most exciting creative talent, The Four Fridas promises to immerse its audience in a visually thrilling experience, combing elements of ritual, music, narration, contemporary dance, and aerial choreography performed alongside video projections on a giant flying canvas.

As if that’s not enough, a group of young indigenous women from the remote village of Xochiapulcho in the Sierra Puebla will enact the extraordinary flight of the Voladores – a breathtaking fertility ritual, usually conducted by men, protected by UNESCO in its schedule of “intangible heritage”

“Three years on from co-directing the Opening Ceremony of the Paralympic Games it’s a great privilege for me to be working at large scale once again, particularly in celebration of one of the world’s most visionary disabled artists”.

Venue & Ticket Prices TBA // There will be both paid seated ticketing available in advance and substantial free promenade access available on the day. Tickets for reserved seating will go on sale on 14 May at www.festival.org.