Cigarette smoke fills Hackney Showroom’s main space, the music rises and Peter Clement in a long, dark frock appears out of the gloom. And my hubby shouts out “Das ist meine Mumie!”

Berlin. New York. Hackney. The theatricality of drag is truly international. But the demise and stagnation of the UK’s gay culture seems to be subsumed into the mainstream. Is there nothing ‘sub’ about our culture anymore? Thankfully, the tradition of basic ‘Man-in-frock-mimes-to-Judy-Garland’ has been transformed into something more than the back room of a boozer show we all grew up with.

Frau Welt, a marvellous melange of traditional drag cabaret and a gruesome Teutonic retelling of ‘All About Eva’, whose murderous ambitions culminate in a toxic hatred of all things Angela Lansbury, in a 1930s Kit-Kat club for a young Hackney crow, is as Weimar Berlin as it can get.

Peter Clement’s character, (also a medieval depiction of how malevolent women were seen by the clergy at the time) is very engaging and a joy to watch. Written by the artist and Oliver Dawe, their faces were a picture when we showed them a photo of my husband’s mother, Irma. A spitting image of their creation and also from Berlin. 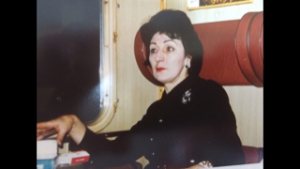 Listen to “The Tony P Radio Show”Listen at your leisure at
https://www.mixcloud.com/the-docker/