Calling All Foodies – 2-4-1 Tickets for the Foodies Festival in Battersea Park!

Like your grub? We sure do, so we’re mega-excited about the Foodies Festival in Battersea Park. And if there’s one thing that makes good food taste even better, it’s knowing you’ve got a bit of a bargain too! 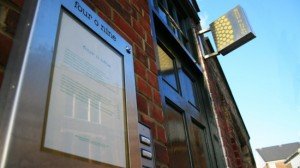 One of the highlights of the festival will definitely be four o nine, one of Clapham’s best restaurants. Here’s what they’ve got to say about the Foodies Festival:

Too many restaurants and too little time eat at them all? Experience London’s trendiest restaurants, all in one place, at Foodies festival in Battersea Park this August.

Clapham’s ‘Hidden Gem’ (Taste of London awards 2010) four o nine will be joining a catalog of London’s most fashionable foodie hangouts and brands, popping up at the Foodies Festival in two weeks time. Now in its sixth year, this 3-day-festival in Battersea Park gives Londoners the opportunity to sample a diverse range of food and drink all in one place, from prices as low as £3.

London food-lovers will also be able to take part in a plethora of activities throughout the 3-day festival; including Food and Drinks Materclasses, Chef’s Theatre, featuring prestigious chefs Clare Smith (Gordon Ramsey) and Gary Lee (The Ivy) and a selection of brands, street food stalls and produce markets.