Excellent food is sadly overshadowed by a bizarre service experience at this bustling Soho hotspot. 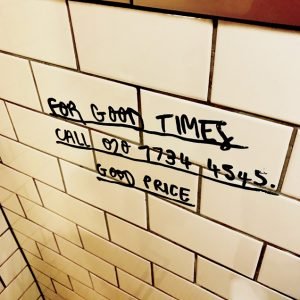 Cards – or rather, vouchers – on the table: To Do List visited Flavour Bastard after having received a voucher as a Christmas present. A £50 voucher covered dinner for two, with three small plates, a pudding and a cocktail each. Sounds good right?

Well, warning bells began chiming as soon as we arrived. Seated at a decent (although isolated from other guests) window table, we were just taking a look through the menu – full of tasty looking treats, and a good selection of veggie & fishy dishes for this veggie/pescie pair – when we were presented (by whom we shall refer to as Server One), with a condensed menu featuring just half of the Small Plate choices (and just one of the puddings – more on that later). 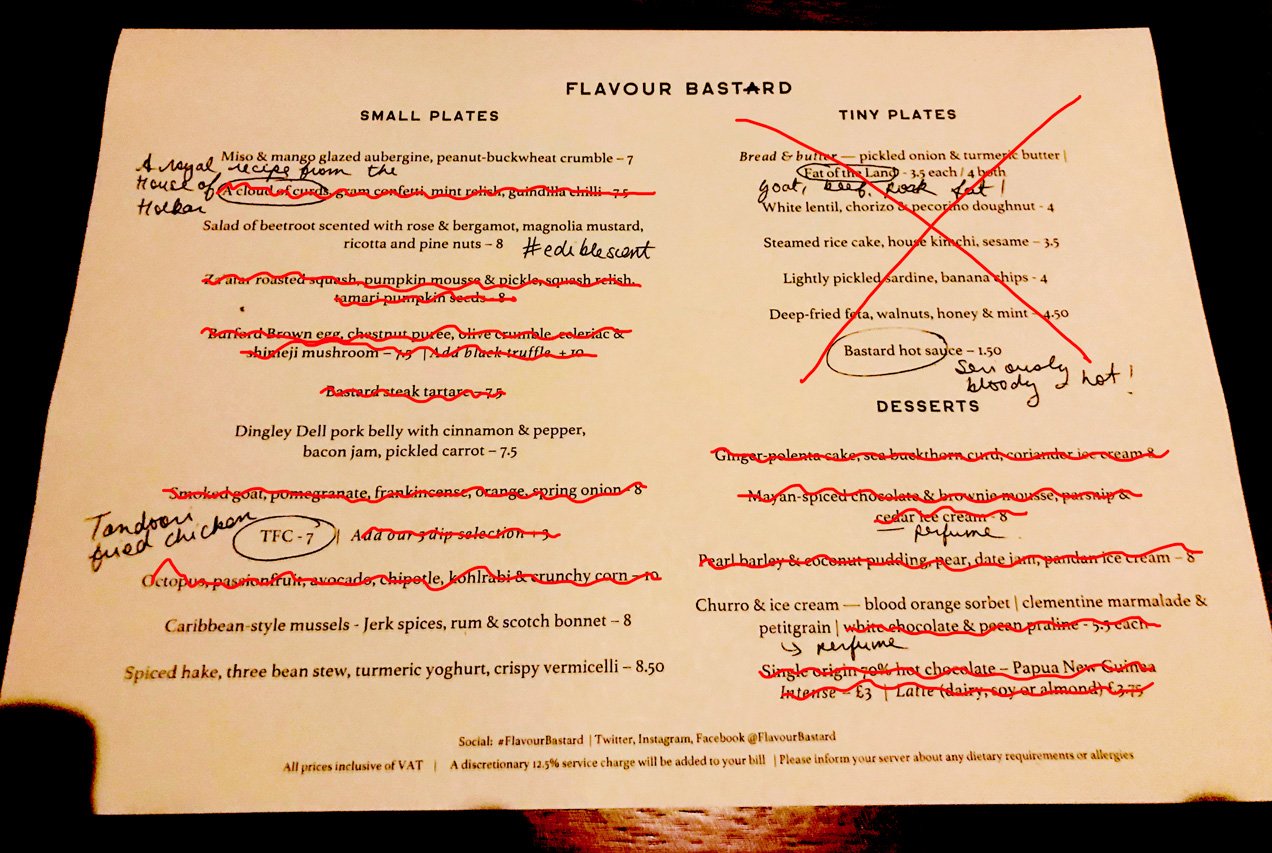 The full Flavour Bastard Menu, with dishes not included in Time Out’s £25 Dinner deal crossed out…

Ok, look, we know how these deals work – you bring people in who might not otherwise have visited, and you offer them the less expensive items from the standard menu – but it was hard to understand the thinking here, as some of those dishes now not available to us were the cheaper ones, or the same price as others we were still allowed. Worse, we were now faced with a challenging scenario: choose six dishes from six choices, two of which contained meat! 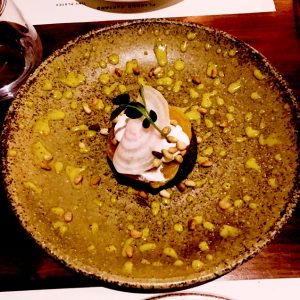 Whilst working out the permutations, Server 2 almost gave us the ‘specials’ menu – but, seeing that we had the different type of ‘special’ menu, took it away. Server 1 was soon back, and we explained the challenge facing us – he confirmed that we would be offered some alternative dishes to choose from and, on request, brought us the cocktail menu. “Can we choose any cocktail?” we asked. “Pretty much,” his vague response as he disappeared to the back of the restaurant.

Next up, Server 3, who kindly offered us the dishes from the full menu previously unavailable to us but now back in play given our veggie/pescie requirements. Woohoo! Still, no-one explained that dishes would come out in three sets of two – actually a really good approach, but a surprise to us – nor did anyone seem interested in the fact that we would happily have ordered some side dishes, or perhaps an extra dish or two from the specials menu which we never got to see…

So to the food. And wow, was the food good. Five star good, seriously. It deserves a few paragraphs of (fairly) unadulterated praise. So here goes… 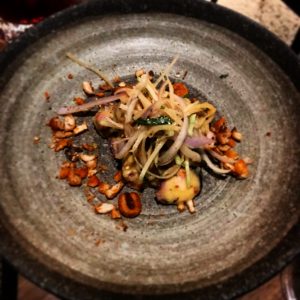 First up (whether by chance or design, who knows?) came a pretty salad of beetroot scented with rose & bergamot, dressed with magnolia mustard, ricotta and pine nuts; and an excellent dish of octopus served with passionfruit, avocado, chipotle, kohlrabi & crunchy corn. It turned out we had chosen what worked perfectly as two cold starters, each more filling than you would expect from what is labeled a small plate but leaving plenty of room for the food still to come.

Next, a miso and mango glazed aubergine with a peanut-buckwheat crumble – pretty much the best aubergine dish we’ve tasted, small but perfectly formed, a flavour and texture explosion – and the powerful, spicy punch of a bowl of Caribbean-style mussels, cooked and spiced to perfection (just watch out for the scotch bonnet!). 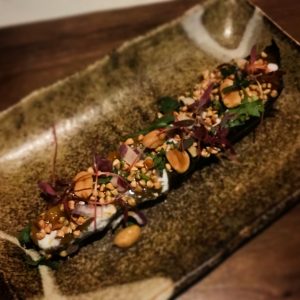 Finally – for the small plates – the intriguingly described ‘cloud of curds’, another lesson in expert taste and texture combinations, the soft savoury curds offset by the crunch of gram confetti and the gentle heat of guindilla chilli; and a hake and bean stew, hearty and earthy, topped with a cheeky turmeric yoghurt and crispy vermicelli.

It’s fair to say that, where the food is concerned, Flavour Bastard knows what it’s doing (although anyone allergic to full-on fusion cooking should go elsewhere) – and the cocktails are pretty decent too. The Negroni may have been a little underpowered, but The Postscript – Yaguara Cachaca, Lime, Maraschino, Green Chartreuse, Parsley, Sage, Rosemary and (you guessed it) Thyme – was boozy and flavoursome. 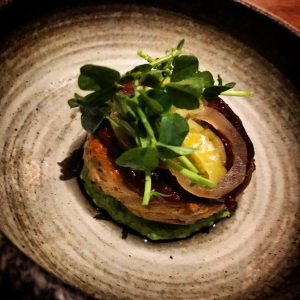 All back on track? Well, almost… though Server 4 had to check with us after our fifth dish to find out what our sixth dish was, and our order of more drinks  – an excellent Bastards’ Brew on tap – seemed to catch them by surprise, as if we weren’t expected to order anything else that we might have to pay for…

The reduced pudding choice – churros & ice cream, £2 cheaper than the other three dishes on the full menu, was the only option available to us – was, perhaps inevitably, further reduced! For no obvious reason, the choice of ice creams was cut down from the burdensome three on the full menu, to just two for us. So, sadly, no chance of trying the white chocolate & pecan praline. The churros were decent though, the clementine marmalade ice cream delicately yet zingy and the apple & cherry sorbet sweet, sticky and refreshing. 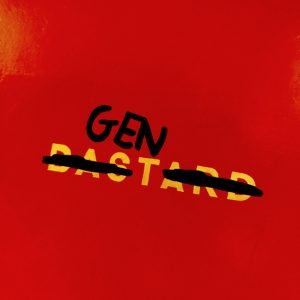 And so, finally, to the farce that was payment. Server 5 dropped off the bill, which featured not only our additional drinks, but also the puddings that were included in the voucher! This was quickly taken away once we pointed out the mistake – “will be back soon with your real bill” – then Server 4 was back, briefly, to ask if we still had the voucher print-out which we had in fact given to Server 1 when we first arrived, and then – finally – Server 6 (!) brought us the same bill but suggested we only needed to pay the service charge (so effectively, our beers were on the house)…

We quickly paid – almost double the service charge, I should point out, as that’s what we had expected to pay and weren’t after a discount! – and escaped gratefully into the cold, wet, and windy streets of Soho. A more bizarre restaurant experience we are unlikely to have!