We’re already excited about The Raunch, London Wonderground’s flagship show for 2016 which looks set to be one of the hot tickets of the summer!

We caught up with headline act Empress Stah to talk The Raunch, showstopping acts, digital circus, and – of course – some ace things to do in London… 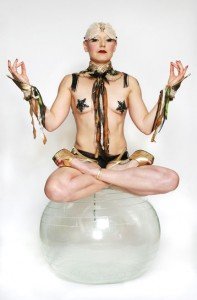 Your Majesty, tell us about The Raunch?

The Raunch is a Cabaret Circus show with an all-star cast of performers from London, Berlin & New York.  It’s an electric western with neon cowboys, part ranch and part strip club, with a cast of cowboy archetypes, including a red-hot gunslinger, an albino white ghost rider and identical bar room beauties. We have a fully animated, projected set, including the saloon, the frontier town, the hanging tree and a starry night sky which lights up our campfire sing-a-long.

What makes The Raunch different to other cabaret shows out there right now?

This show is not just a variety show featuring a line up of acts, we have developed a loose narrative arranged around the performers skill sets, which are from the worlds of circus, magic, drag, music, song and dance and we are now all creating new material with our existing skills to develop the narrative, whilst also learning new skills like knife throwing, whip cracking, gun sword swallowing, fire slinging and bullet catching.

You’re headlining the show – what can audiences expect from an Empress Stah showstopper?

Well I don’t want to give the game away, but there is a certain aerial act that I perform involving lasers, and… yeah, well that. 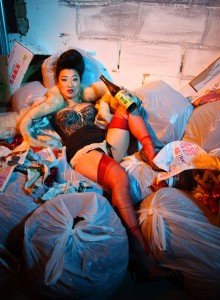 We love London Wonderground – is this your first visit?

I love London Wonderground too!! I have been seeing shows there since it opened, the publicity posters of all the acts on the walls are like a family photo album, this is my cabaret circus world. Last year I directed a show down there called ‘Moonshine’, it was for one of the Club Spiegel’s, of which I was the poster girl. I have appeared in various cabaret line ups over the years, but this is my biggest and boldest show to date.

You founded digital circus company Zero Central with your husband – tell us more about that?

Zero Central is a digital circus performance and creative production company that we established in 2014 as a vehicle to do what we do. My husband, Graham Sugarlump Power,  is a fashion designer and DJ/VJ coming from the worlds of glam rock, punk and the acid house party scene, whilst I am a circus cabaret performer, director and producer, coming from the underground worlds  of neo-burlesque and fetish clubs. Zero Central is one of the producing partners of The Raunch, we are the artistic directors and are creating all of the show content in-house.

Well I don’t have a lot of time off really, and when I work I am kind of out, so when I have time off, I tend to stay in. If I do want to go dancing then the hubby and I will go to the gay clubs of East London, such as The Glory or Horse Meat Disco, as we love the freedom of queer culture. Eating out usually means grabbing a Vietnamese on Kingsland Road or from our local Thai restaurant.

There are free and cheap things to do in London? (Stu: Clearly you need to check To Do List more often!)

The Raunch runs at London Wonderground from May 5 to June 12.  For more information and to book, head to http://www.londonwonderground.co.uk or call 0844 545 8282