★★★★½ E15 at Battersea Arts Centre – A Scintillating Call To Arms

A scintillating call to arms on the ever more pressing issue of social housing provision, this is activist theatre nearing peak power.

The spectre of rising rent, unscrupulous landlords and the threat of eviction are known to far too many Londoners, but shamefully it is too often those who stand to suffer the most – those in, or in need of, social housing – that suffer the most harrowing of consequences. 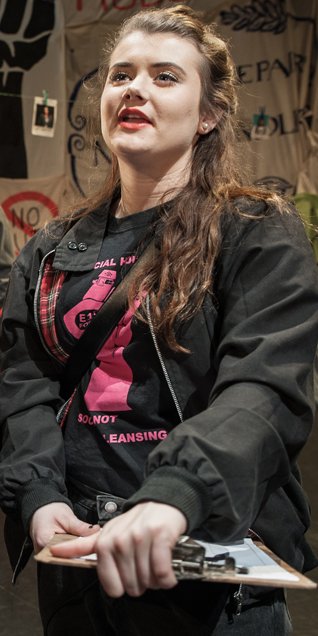 LUNG’s E15 is a timely piece of documentary theatre following the Focus E15 campaign – led by a group of young, single mothers who were served eviction notices by East Thames Housing Association in September 2013.

Regardless of subject (everything is of interest to someone, somewhere), documentary theatre – and, specifically, verbatim theatre – ultimately stands or falls on whether the collage of supporting evidence is engagingly reconstructed, and whether the performers can ‘be’ the words they speak, rather than just breathing loudspeakers.

In all regards, E15 triumphs – the subject matter is undeniably relevant, the real-life testimonies of 29 single mothers and children respectfully handled whilst maintaining a solid narrative structure, and the talented cast of performers re-speak their words not simply as faithful regurgitation but as live, breathing characters. That is to say that E15 achieves what much verbatim theatre cannot (indeed, what much verbatim theatre doesn’t attempt) – the audience is enabled to feel that they are observing the real-life players themselves, rather than actors repeating lines word for word.

There’s a real stand-out moment approximately 45 minute in, which serves to knock from the audience any sense of  complacency. This moment is a reminder that the divide between the have’s and have not’s is not always so obvious, and provides a voice to yet another disadvantaged sector of society deeply affected by the social housing crisis.

E15 may not be the beginning of the end of the housing crisis, but one must hope that it at least marks the end of the beginning of the fight, a gateway to the next stage. There’s a long way to go yet, but activist performance like this brings relevance to theatre which is often obscured to say the least, and should encourage audiences not only to further consider the plight of those less well off, but to think about how to make a difference to those people’s lives.